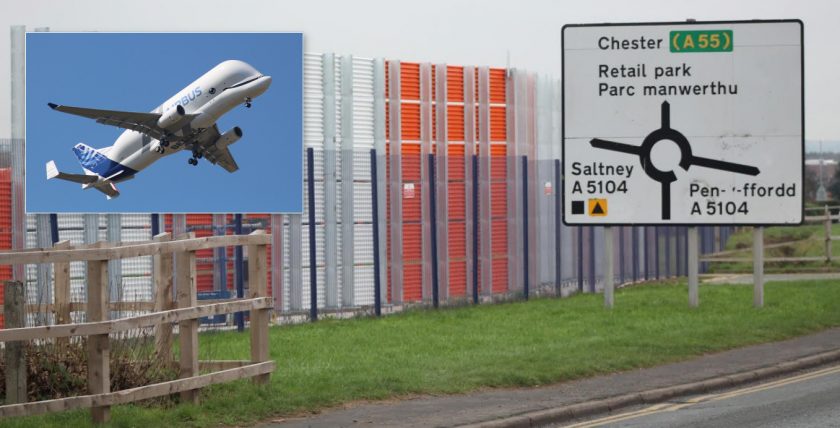 Final preparations are underway ahead of the much-anticipated debut of Beluga XL – the next generation of transport plane from Airbus.

It is one of two being erected at the airport, the others are at the far end of the runway.

The first of five BelugaXL’s to be built successfully completed a four-hour maiden flight on July 19 taking off from Blagnac in Toulouse.

Following the maiden flight no.1 BelugaXL has embarked on a 10-month, 750-flight hour certification campaign.

As part of the certification process the giant airlifter is expected to fly over to Airbus Broughton sometime in February, though a date has yet to be confirmed.

With a wingspan of 60 meters – 35% bigger than of the existing Beluga – along with increased capacity and take-off weight, Hawarden Airfield is being upgraded to a ‘Code E’ aerodrome which has required modifications ahead of the new transporter coming into service.

As well as the resurfacing of the runway, new turn pads have been constructed to both ends of the existing runway as well as the erection of the blast fences.

The new fences being constructed at either end of the Hawarden airport runaway.

Blast fencing, also known as jet blast deflectors – are a safety device that redirects the high energy exhaust from a jet engine to prevent damage and injury.

“The blast fences are the final preparations for the entry into service of the BelugaXL later this year. The new aircraft will be able to transport two A350 wings simultaneously and are vital in securing Airbus’ future plans.”

A second Beluga XL, which is in the final phases of assembly in Toulouse will be the first into service.