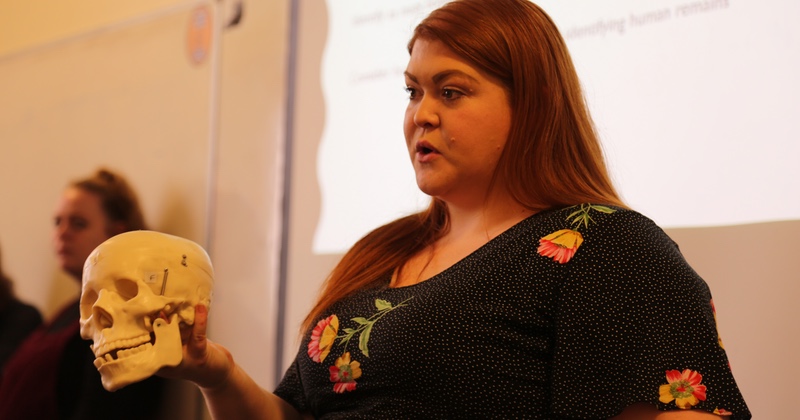 A university lecturer is doing her bit to combat a cultural phenomenon that not only affects public perception of forensic science, but has also found its way into the courtroom.

Amy Rattenbury recently welcomed a group of crime writers to Wrexham Glyndwr University for a day of activities designed to shed light on the latest forensic science techniques in a bid to combat the so-called ‘CSI Effect’.

Amy, a lecturer in Applied Sciences at Glyndŵr, said that the term refers to the way that procedural investigation series such as the global smash hit CSI franchise affect public perception and understanding of forensic science and how it applies to criminal cases.

“Basically people are watching crime programmes and assuming that everything that happens in them is correct when it isn’t always,” Amy said.

“There’s a big push-back from the forensic community now but also from people that write TV programmes and crime fiction books to make sure that things are accurate, more and more companies and writers are getting in touch with forensic experts to make sure that what they’re saying it true but also works for their novels.”

The term most often refers to the belief that jurors have come to expect more forensic evidence in criminal trials, thereby raising the effective standard of proof for prosecutors.

Amy said that that the CSI Effect also had some positive aspects, such as increased public interest in studying forensic science, but added that it was having an influence on the courtroom.

Juries now aren’t as lay as they used to be, so they think they’ve got more forensic awareness because they’ve watch these programmes and read these books, and then they’re expecting to see all the types of evidence that they see on TV,” she explained.

“Quite a lot of research has been done on it and they reckon juries are less likely to convict people now because they’re expecting to have that perfect piece of DNA for example, and it just doesn’t exist; so it’s really starting to impact on the criminal justice system.”

The event at Glyndŵr’s Plas Coch campus came about after Amy held a well-received talk at the Wrexham Carnival of Words literary festival earlier this year, with aspiring writers seeking answers to further questions including how to portray crime scene investigations in bygone eras.

A group of around 15 writers from the area, most whom write crime fiction, took part in a day-long series of activities offering including taking and analysing fingerprints, taking footwear casts and discussing preservation of evidence.

The writers gained an insight into pathology with a human identification workshop and were also quizzed on their knowledge of the topic.

Amy said she was pleased with the reaction from the writers, several of whom said they would look to focus more on how forensic investigators feel when working to strong evidence under pressure.

She added that she would like to advise the writers on their work as it is being created.

Wrexham Glyndŵr University is set to hold a 12-week short course, entitled Notorious Crimes and Criminals, which will go to the heart of currents debates on criminal justice in England and Wales.

The course will cover ten notorious crimes and criminals, including the Yorkshire Ripper Peter Sutcliffe, Moors Murderer Myra Hindley and others.

It starts on Thursday, January 30 2020. For more information or to book a place, visit the university’s website. More information on what Glyndŵr’s BSc (Hons) Forensic Science (four years including foundation year) programme has to offer, can be found here.