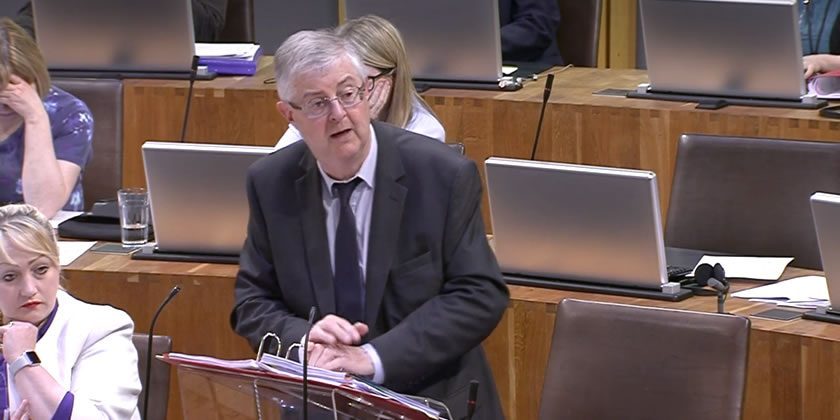 For those who have never ventured onto the Senedd site, you can view the session the below was taken from here, that displays a video of the meeting (along with creation of your own clips!) plus by clicking the ‘meeting information and papers’ link you are able to view all the supporting documentation, along with a link to the full transcript.

Leader of the Opposition, Paul Davies AM (Con, Preseli Pembs.), returned to the under-performance of Betsi Cadwaladr health board:

“According to the Daily Post, a freedom of information request found 70,908 people have had to wait more than six weeks for their out-patient appointment. A staggering 27,334 people have had to wait at least 53 weeks…. And let’s look at some other facts, First Minister. Patients attending the emergency department are now waiting, on average, seven hours to get a resolution.”
– Leader of the Opposition, Paul Davies

Mr Davies repeated that special measures were doing little to change the situation and also repeated calls for the Health Minister to resign.

The First Minister said the health board will remain in special measures for however long it’s deemed necessary by the Minister. He accused Mr Davies of being selective in his figures, as across Wales the proportion of patients waiting longer than 26 weeks for treatment was at its lowest levels since 2018 and therapy waits were 98% lower this March compared to last March.

The First Minister added, “Patients in north Wales get, every single day, in thousands and thousands of encounters with the health service, some of the best care that you will find anywhere in the country. Where there are things that need to be done better, of course we will continue to work on those things. But it doesn’t help to bring about that improvement by failing to recognise it and treating the whole of that service as though it were something that was not valued by patients—because I can tell him that it certainly is.”

Opportunities for Bridgend after Ford announcement

Adam Price AM (Plaid, Carms. E. & Dinefwr) found it hard to believe the Ford engine plant announcement was that much of a shock given long-standing uncertainty over jobs at Bridgend. Would the Welsh Government now take a leaf out of Scotland’s book – following the closure of the Michelin plant in Dundee – and go and meet Ford’s executives in America?

Mr Price moved on to discuss future uses for the site:

“We know the future of cars is electric, and one of the leading companies in the field is Tesla. It’s opened two gigafactories in the US. It’s looking to open one in China and one in Europe….Elon Musk has specifically said….that if GM closes plants in the US, he’d be interested in taking them over. Could that principle be applied here? Another major company in the field is the Swedish company, Northvolt, which is building a gigafactory producing battery cells with the help of one of the biggest ever investments by the EU’s strategic investment fund and the European Investment Bank.”
– Adam Price AM

The First Minister agreed that all of that was worth adding to the mix of suggestions for the future of the Bridgend plant adding that the recent announcement that a battery plant will be set up in Port Talbot is a sign Wales is able to attract these kinds of investments.

Are Community Health Councils the voice of the patient, or the government?

Mark Reckless AM (BXP, South Wales East) asked about the levels of autonomy for health boards and community health councils (CHCs). Did the special measures regime strike the right balance between local and central control? He was concerned proposals to change CHCs will lead to more “top-down” bodies “under the thumb of the Welsh Government”.

The First Minister was adamant there would be a greater voice for patients:

“As far as CHCs are concerned, I think we have a proud history in that area. We retained CHCswhen they were abolished across our border, and we’ve always supported them in the work that they do. Now there is an opportunity, in the legislation that will come before the Senedd, to make sure that, with the part that CHCs play in the quality arrangements that we have in the Welsh NHS, we maxim ise the contribution that those local voluntary people have in being the eyes and ears of patients.”
– First Minister, Mark Drakeford (Lab, Cardiff West)