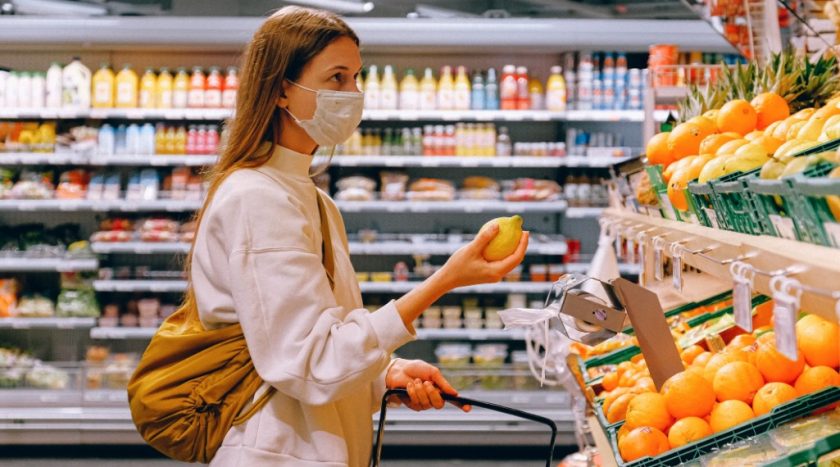 People using supermarkets and shops in England will have to wear face coverings from 24 July.

The UK government is set to announce the move on Tuesday, they will also say that enforcement is to be carried out by police and not shop staff.

The move will bring England into line with Scotland and other major European nations like Spain, Italy and Germany.

Announcing the move, a Number 10 spokesperson said: “There is growing evidence that wearing a face covering in an enclosed space helps protect individuals and those around them from coronavirus.

Earlier today, the Welsh government announced that a three layer face covering on public transport and in taxis will become mandatory in Wales.

First Minister Mark Drakeford said that the measures will come into place from July 27th.

Although face coverings have been required on Arriva Buses across Wales, up until now they have not been mandatory on wider public transport and in taxis.

Previously advice been that three layer masks are “recommended” in certain situations where social distancing is not possible, despite calls from some to make wearing face coverings a requirement.

Speaking at today’s daily briefing, First Minister Mark Drakeford said: “As more people return to work and the economy reopens there will be times when not always possible to maintain 2m on public transport.

“Often people can be spending periods of time travelling without option of leaving the vehicle.

“It will become mandatory in Wales to wear a three layer face covering while travelling on public transport and that includes taxis.

“This will come into effect from July 27th.”

He added that he is not mandating the use of face coverings in other public places – however this advice may change is cases of coronavirus increase again.

Mr Drakeford said, “as far as wearing face coverings in other places is concerned, the advice of the Welsh Government is if places are crowded, then face coverings are advised (but not mandatory)  where the places are not too crowded.

It is a matter for the individual citizen to make that decision.

The prevalence of coronavirus in Wales is at the lowest since this (pandemic) began.

We carried out over the weekend over 7000 tests on the three days and the prevalence was somewhere below half of one percent.

We have to be proportionate in the things we ask people to do, we have not decided to make them mandatory in those contexts, if coronavirus begins to circulate then our advice may change.”

Shadow Covid Recovery Minister Darren Millar MS welcomed the First Minister’s announcement but questioned why it is not being introduced immediately.

He said: “The mandatory wearing of face coverings on public transport and in shops in Wales was a key element of our 10-point plan published last week.

The First Minister and his Cabinet must produce the scientific evidence – if it exists – to justify introducing them two weeks from now rather than with immediate effect and why only on public transport.

Lockdown is being eased, life is returning to a ‘new normal’, but we must still take every precaution to avoid a second wave of cases, and making wearing facemasks mandatory from today may go some way to achieving this – but only if brought in now.”