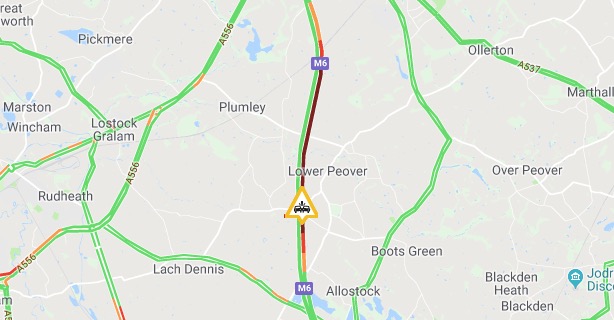 All lanes are clear.

Drivers heading for the M6 southbound through Cheshire are being warned to expected delays this morning.

All lanes have been temporarily stopped and stationary traffic due to an overturned car between J19 A556 Chester Road (Knutsford) and J18 A54 Middlewich Road (Middlewich / Holmes Chapel).

The incident is in the roadworks area according to traffic reports, “vehicle has overturned can came to rest in lane two.”

There’s a further collision on the Northbound carriageway in Cheshire – the latest traffic report states:

‘Stationary traffic due to all traffic being temporarily held and accident, car and a lorry involved on M6 Northbound after J18 A54 Middlewich Road (Middlewich / Holmes Chapel).

Congestion to J18 (Middlewich / Holmes Chapel). In the roadworks area. Lanes one and two (Of three) were blocked until around 08:00 when traffic was held. Accident has occurred just after the entry slip.’