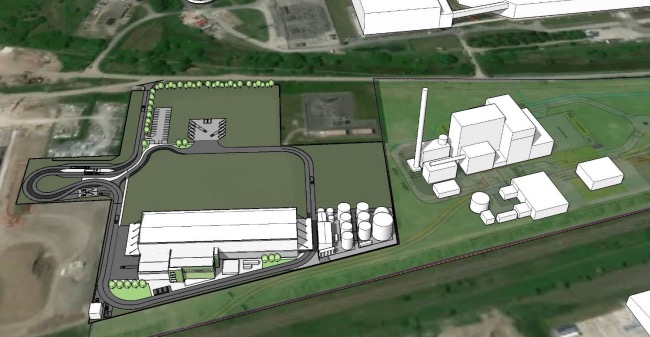 Proposals for a waste management plant handling up to 182,000 tonnes of rubbish a year look set to be approved.

Planning officers at Flintshire Council have given their backing to plans by developers Logik WTE to build the biogas facility on the former Gaz De France power station site on Deeside Industrial Park.

If it’s voted through by councillors, it would allow waste to be diverted from landfill to produce up to two megawatts of green energy.

The authority’s planning chief Andy Farrow said the plant would provide an economic boost to the area.

He said: “In terms of absolute capacity requirements there is no compelling need for the facility in terms of North Wales, however, the site represents a sustainable location which is easily accessible via road and rail.

“Subject to the inclusion of conditions it is considered that there would be no harm to protected species or designated sites or the amenity of the local area.

“The proposal would enable the beneficial reuse of land which is currently vacant and would provide economic benefit through the provision of both direct and indirect jobs.

“The proposal is therefore recommended for approval subject to no additional material issues being raised by Connah’s Quay Town Council following their Planning meeting.”

In response to a public consultation, the local planning authority received one letter of objection on the basis that the facility was not needed and claimed the technology which is set to be used was not in accordance with national waste policy.

A letter was also received which didn’t object to the application in principle, but raised concerns about the impact of the proposal on surface water and the nearby drainage system.

The former power station was constructed in 2001 mainly to supply heat to the neighbouring UPM Shotton Paper Mill.
It stopped generating power in June 2012 and the decision was taken to close the station.

Proposals to grant permission for the plant will be discussed by planning committee members next Wednesday.