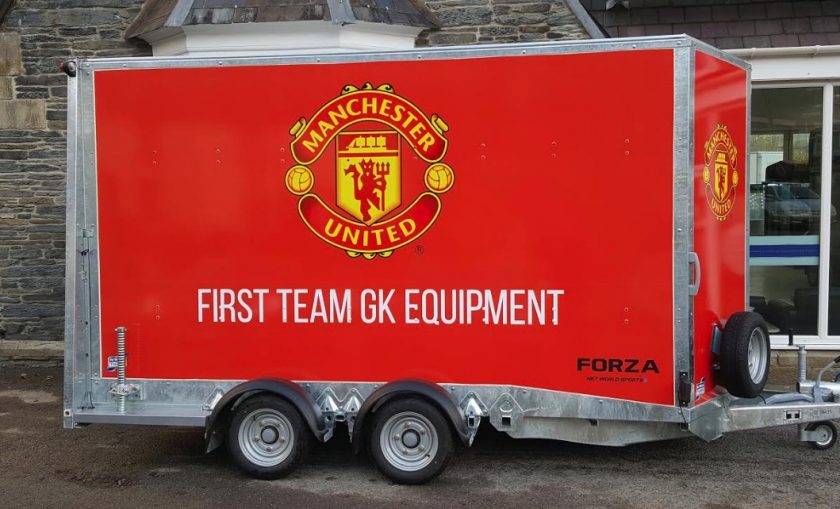 Manchester United’s superstar goalkeeper David de Gea is being given a helping hand to stay at the peak of his powers by Europe’s largest trailer maker.

The Red Devils have taken delivery of a box van from Ifor Williams Trailers to store and transport training equipment for de Gea and his fellow stoppers, including Argentinian international Sergio Romero.

The trailblazing brand has been working with Wrexham-based sports and football goal supplier Net World Sports to design  the secure vehicle to store vital first team kit including goalposts, nets and shelters.

The BV126 box van, which was wrapped in Manchester United’s globally-recognised red logo, is now on-site at the club’s Aon training complex in Carrington, Manchester, where it can transport training equipment from pitch to pitch as necessary.

IWT sales manager Dan Joyce, who assisted Net World Sports, said: “We were delighted to be involved in the project and assist Net World Sports for the first time. They are an international company supplying professional and grassroots sports equipment all over the UK and beyond.

“They were asked to source a trailer for Manchester United to carry the first team sporting equipment and came to us. Since then, we’ve been working with Robbie Hayter, the company’s sales lead. He approached us with the concept and what was required and we were happy to help, advising the best trailer to meet their needs.

“Ifor Williams is an internationally-recognised brand and trusted globally for its trailer solutions. It is regarded highly for its quality and now it has been sourced for one of the most recognised football teams in the Premier League and the world.”

When it came to choosing the right model for the job, Dan looked no further than IWT’s box van range.

“The BV126 is strong and secure. It is 12ft in length, 6ft wide and has 7ft headroom so has the ideal space for storage. There are also ramp-door combination doors at the back. It is well within its capabilities,” he said.

“We also provided the wrapping service and worked closely with the marketing team at United who provided us with a high resolution logo. It was very important we precisely matched the colour code of the brand as it’s not just any red.”

Net World Sports was established by Oswestry-born Alex Lovén in 2009, who was inspired to launch a sports equipment business after buying a cricket bat online as a teenager.

One of Britain’s richest young entrepreneurs, his company now boasts annual orders of more than 350,000 – many of which are overseas.

The company has also developed the innovative lever-operated FORZA Alu110 360˚ rotational goal wheel allowing goals to be turned in all directions for easy movement, which is patented and was designed and tested in conjunction with Manchester United’s ground team.

“Manchester United has a lot of training pitches across the complex. They needed a portable storage solution. We looked at a few options and then I thought why not source a trailer? It would be so much easier. It’s not only road legal, it also gives them flexibility.”

Robbie said there was no doubt in his mind which trailer firm would be best to pull off the job.

“We were already aware of Ifor Williams Trailers through their sponsorship of Wrexham Football Club. We knew Ifor Williams was a quality brand. To be honest we didn’t even shop around for trailers, we went straight to Ifor Williams. We saw it as a local firm with a strong Wrexham connection.

“I wanted to keep it simple. We discussed a few models and the BV126 was the biggest of the box vans. Dan was very helpful and suggested the van over a trailer to make it easier to ship the heavy equipment around. There were a lot of details to contend with but he was on the ball. He explained we could also drive it on the road as it had a number plate and so we decided it was the best option.”

“Our box vans have the “premier touch” when it comes to durability and ease of maintenance, as well as generous storage space, making them a winning combination for any business. I’ve no doubt our BV126 will be a welcome addition to the team.”