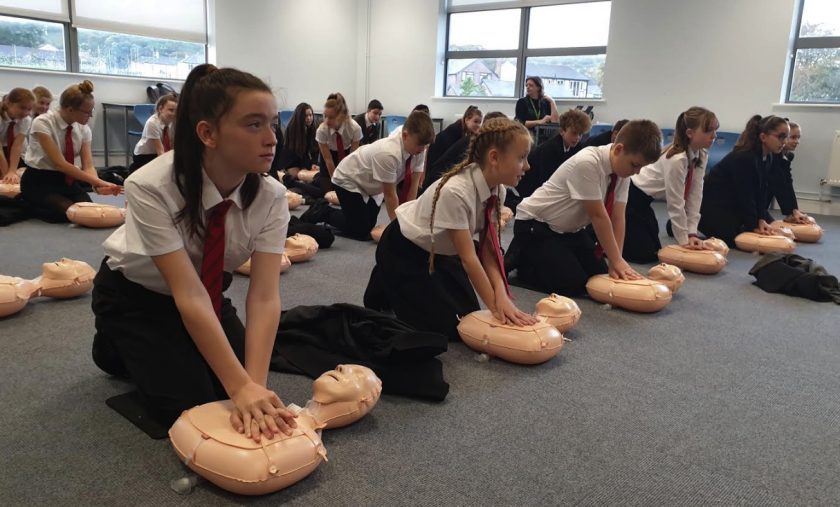 Councillors in Flintshire have unanimously backed calls for emergency lifesaving skills to become compulsory in schools across Wales.

The Welsh Government currently leaves it up to individual schools to decide whether to deliver first aid training for children.

However, Gwerynymynydd councillor Kevin Hughes wants the Cardiff administration to follow in England’s footsteps, where teaching youngsters to provide medical assistance will become mandatory from September next year.

It comes as cardiac arrest survival rates are as low as one in ten in some parts of the UK outside of hospital settings.

Cllr Hughes said helping children learn CPR and how to use a defibrillator could save a large number of lives.

Speaking at a meeting of all 70 councillors in Flintshire held yesterday, he said: “We have hundreds of defibrillator machines across Flintshire right now.

“While it’s a great photo opportunity for community and county councillors when they’re installed, what we really need is people trained and confident in how to use them.

“If all learners attending Flintshire schools are trained in their use then how many lives could potentially be saved?

“Some of our schools do provide first aid training but it’s not compulsory and doesn’t happen for lots of reasons in every school and that needs to change.

“We need to call upon the Welsh Government to include first aid training, including the use of defibrillators, within the new curriculum and provide schools with the funds to deliver that training.”
The British Heart Foundation has previously appealed for CPR to be taught in all schools in Wales.

But earlier this year education minister Kirsty Williams said the curriculum was moving away from a prescribed list of subjects.

The appeal by Cllr Hughes for the government to reconsider the move received the backing of politicians across the chamber at County Hall in Mold.

Labour council leader Ian Roberts said: “In Flintshire, there are an increasing number of schools with defibrillators installed, many of which have community access.

“This is a very important issue and I would urge members to support and accept this notice of motion and agree that a letter should be sent to Welsh Government.

“From my experience in school, children love doing this sort of thing and I think it’s something that would be very much welcomed.”

He added it would be up to ministers in Cardiff to decide whether first aid training is included in the national curriculum.