Connah’s Quay’s forlorn Christmas tree comes in for a bit of a media bashing but there is some GREAT news! 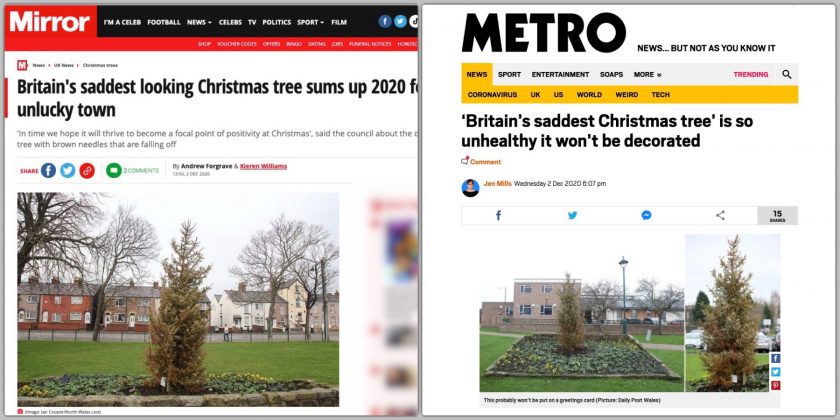 Connah’s Quay’s Christmas tree has come in for a bit of a media bashing in the last couple of days.

The tree, which was supplied and planted last year by Flintshire County Council “has not fared very well in its first year” and looks to be withering away.

Attempts have been made to revive it with fertiliser but for this year, given its poor state of health, no Christmas lights have been placed onto the tree.

The ‘Metro’ has labelled it ‘Britain’s saddest Christmas tree.’

It says: “If you wanted to find a Christmas tree that sums up the year we’ve had, you probably wouldn’t find a better one than in Flintshire.”

ITV’s Good Morning Britain has also had a pop at the forlorn looking tree as has BBC Radio Wales Breakfast this morning. 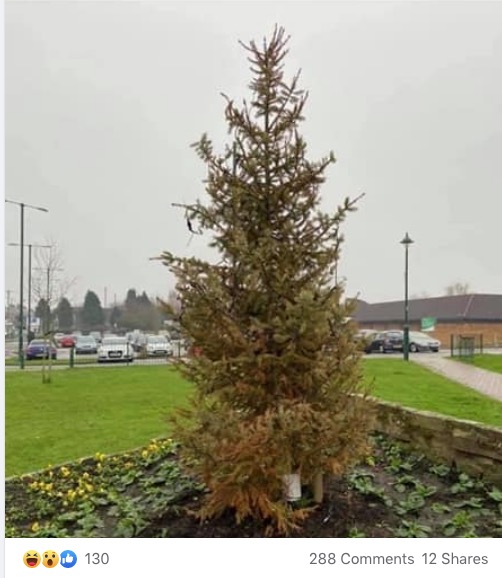 The tree has come under the media spotlight following a post on the Connah’s Quay Group Facebook Page which has been commented on more than 280 times.

Many have expressed disappointed with the towns efforts.

Connah’s Quay Christmas trees have been a bit of a regular on the pages of local newspapers and websites in recent years, mainly because of mindless vandalism.

In 2017 it was attacked three times prompting a £200 reward to be put up to find the culprits.

A spokesperson said: “Once again Christmas trees have become a talking point on social media”

“At the request of the Town Council, Flintshire County Council very kindly supplied and planted a rooted Christmas tree in the bed near to the Connects centre as part of a tree planting project last year.”

“Due to the vandalism of the tree in previous years, it was hoped that a rooted tree would be safer and also kinder to the environment.”

“Unfortunately, the tree has not fared very well in its first year, and whilst not dead, it does not look healthy as pictures circulating on social media illustrate.”

“We have attempted to revive it with fertiliser and hope in time that it will thrive to become a focal point of positivity at Christmas.”

“Therefore, we will not be lighting this particular tree this year. We will do our best to look at other options for a Christmas tree this year and consider a longer term solution based on the feedback so far.”

Following a town council meeting on Wednesday, Cllr Bernie Attridge confirmed that a new 13 ft tree will go up in Connah’s Quay on Saturday.

We understand that this one will be lit up.

Update on Xmas tree after Town Council Meeting. The clerk of TC informed members that a 13FT tree is being put at the bottom of Wepre Drive on Saturday and the lights will be put on early next week.