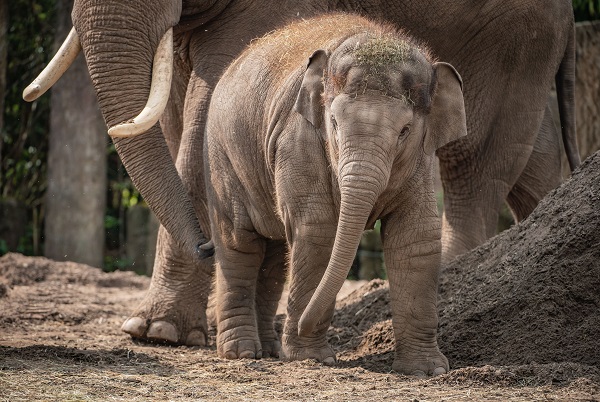 Indali is thought to be a rare case of an Asian elephant surviving the lethal EEHV illness, also known as elephant endotheliotropic herpesvirus.

A large team of specialists continue to watch her closely as EEHV remains a deadly virus and the zoo conservationists are wary of the possibility that the disease might return in the future. Her successful recovery to date is nonetheless a momentous, historic step for Chester Zoo and for global Asian elephant conservation.

Conservationists at the zoo have hailed the ground-breaking developments in early detection and treatment methods – developed in partnership with the Animal and Plant Health Agency and the University of Surrey – which enabled the team to save the young calf.

Keepers, vets and scientists were able to detect the virus earlier than ever before at the zoo, thanks to high tech, on site blood testing techniques. This enabled specialists to begin treatment before Indali showed any outward signs of illness. 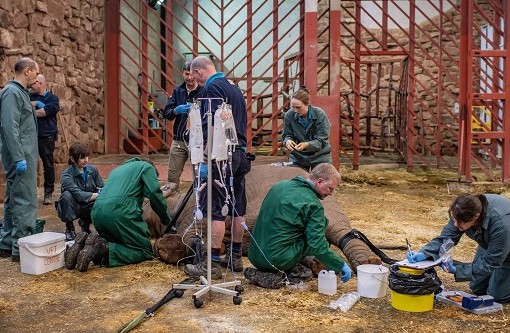 On 2 April 2019, treatments ceased as experts believed she had entered a recovery phase. Now, after closely monitoring her for two months since treatment finished, conservationists at the zoo have declared her recovery complete.

During her recovery phase, keepers at Chester Zoo have been helping Indali and the herd return to a normal daily routine. The team have observed that Indali has benefitted greatly from the comfort of reconnecting with the rest of the close-knit family herd.

She has spent much of her time with her mum, Sundara, and can often be seen playing with her 18-month-old half-brother, Anjan. The rest of the multi-generational herd also closely supports Indali, including her grandmother, Thi.

EEHV is a major threat to the long-term survival of endangered Asian elephants. Reports of wild elephant fatalities in India, Nepal, Myanmar and Thailand are on the rise. It is known to have caused deaths in nine countries across their native range, as well as in zoo breeding programmes worldwide. 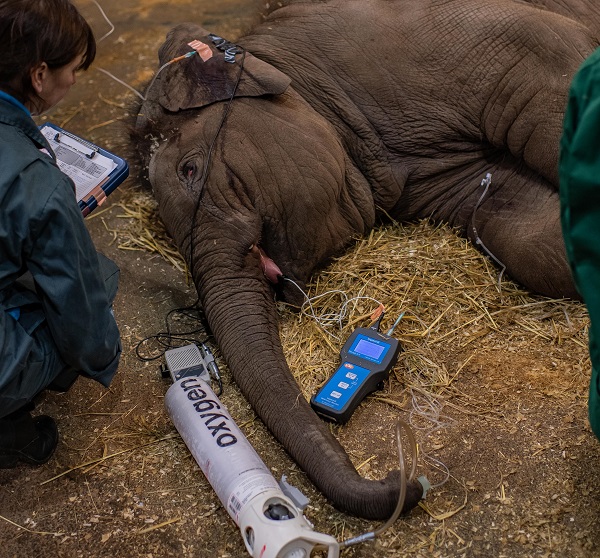 It is thought that most Asian elephants carry EEHV, but only young calves tend to develop outward symptoms, typically around weaning age. When they do, it is usually fatal.

Huge progress has been made in recent years in the fight to find an answer to the global crisis. A team from Chester Zoo, the APHA and the University of Surrey – backed by more than £240,000 in public donations to the zoo – have been at the forefront of attempts to find a solution. The ultimate goal is to develop an effective vaccine that could be rolled out worldwide.

Right now that battle is ongoing, but Indali’s recovery – thanks to early detection methods and the team’s development of her potentially ground-breaking treatment programme – is a major milestone in the journey towards solving the crisis for Asian elephants.

“Asian elephants are an endangered species and a world without them is unthinkable. We cannot underestimate the threat EEHV poses to their future survival. But Indali, wonderful little fighter that she is, and her incredible survival story, has given us enormous hope.

“Her recovery is a major milestone for conservation. Only two years ago, the global search for a solution to the EEHV crisis looked unlikely to bear fruit. Now, there is light at the end of the tunnel.

“Although we are still unable to grow the virus in a lab, our team are exploring new avenues of biomedical science based on characterising the proteins produced by the virus and determining the response to them by the elephant’s immune system. This is bringing us closer to the development of a vaccine.

“And now, the early detection methods we’re already deploying in the zoo – alongside the innovative treatment programme – have delivered remarkable results. “We are eternally grateful to the incredible work of the Animal and Plant Health Agency and experts at the University of Surrey, who have been battling against EEHV side-by-side with us for many years now. Indali would not be alive today without this conservation partnership.

“Crucially, we must also thank each and every person and organisation who has donated to the zoo’s Never Forget campaign in recent years. Overwhelming public generosity has contributed more than £250,000 to the research fund, accelerating our progress and getting us closer to a vaccine quicker than we ever thought possible. Supporters right across the country are part of this ground-breaking conservation journey.”

“A lot remains unknown about EEHV; with fewer than 50,000 Asian elephants left in the wild it is important that we find answers.

Indali’s recovery is wonderful news, and we will use what we have learnt from her case to help us find solutions against this deadly virus to assist the conservation of Asian elephants for future generations.”

“For ten years we have been working with Chester Zoo searching for a solution to EEHV. With the help of many devoted scholars, and other contributors such as the University of Surrey, we have been able to develop a way to tackle EEHV thanks to interferon and immune-boosting treatments which have contributed to Indali’s recovery.

Our efforts are now focused on designing and testing a vaccine to save this irreplaceable species from further suffering.”

Supporters at the zoo and across the country are invited join in a nationwide sponsored walk, raising money for the Never Forget campaign, which continues to fund EEHV research. To register, visit: www.chesterzoo.org/events/summer-stampede-2019/