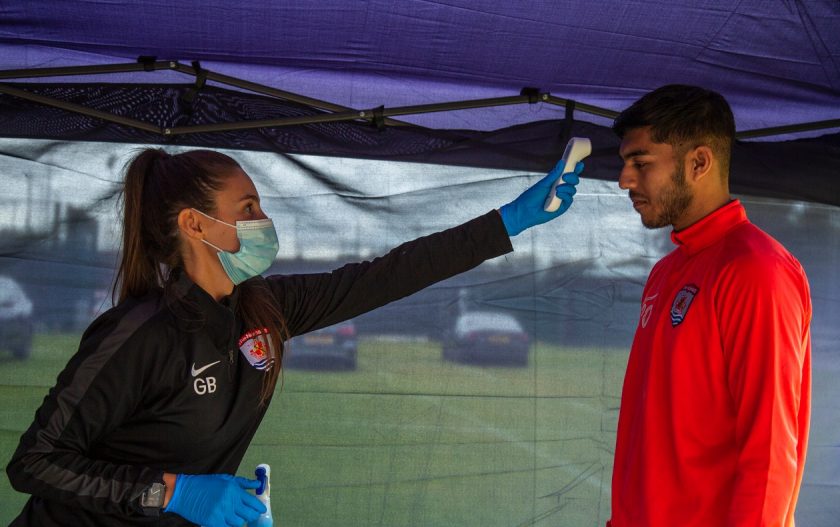 The JD Cymru Premier Champions, Connah’s Quay Nomads returned to training for the first time since the start of the lockdown in March

The session took place at the FAW National Football Development Centre at Colliers Park in Wrexham.

Players arrived at regularly scheduled intervals to ensure that strict social distancing measures were adhered to throughout the session.

The goalkeeping team were the arrived first, with 10 outfielders following an hour later and another 10 arriving 90 minutes later.

So good to be back on the pitch last night with @the_nomads doing what we all love! Different type of session with Covid challenges, but also creates new and exciting sessions to compile ready for @ChampionsLeague football next month! #letsgo pic.twitter.com/NoN9RvABEa

A club spokesman Nik Mesney said: “In preparation for training, new measures have been put in place by the club to ensure that all players now have their own individual exercise mats, foam rollers, resistance bands, drinks bottles and protein shakers.

Upon arrival, the players and staff, who have been completing daily Covid questionnaires all received temperature checks from Head Therapist Gemma Bamford before being allowed to enter the training complex.

The goalkeeping quartet spent little over an hour training with goalkeeping coach Neil Ebbrell before the outfield players arrived – upon their arrival, the groups of 10 were split up into 5’s and used half of the pitch each with Jay Catton and Craig Harrison respectively to again ensure social distancing was adhered to throughout their session which included a thorough warm up a number of passing drills.

The session saw the first time that new signings Aeron Edwards and Danny Davies have linked up with their new teammates.”