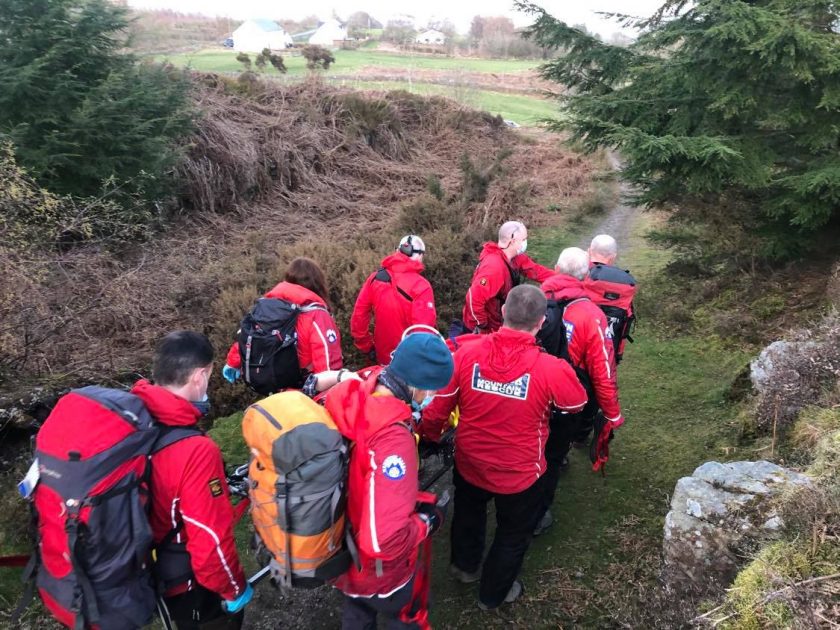 A Flintshire based search and rescue team have had a busy weekend, helping rescue two injured individuals.

The North East Wales Search and Rescue (NEWSAR) team were called to the scene on Saturday evening after the Welsh Ambulance Service requested their assistance to evacuate a man from a footpath above Garth, Nr. Llangollen who had sustained a lower leg injury and couldn’t move without assistance.

The NEWSAR team said, “The ambulance crew were already there and just needed our help to move him. Team members put him into our Casualty Bag and then onto our stretcher, before carrying him down to the waiting ambulance. ”

On Sunday team was called by Dyfed Powys Police following reports of a person injured on a walk in uplands near Llangynog, “The team set off to assist and we then used some phone technology to get an exact location”

“It soon became clear that the stretcher carry would be very long and it was in the casualties best interest to be evacuated more swiftly. We therefore requested assistance from HM Coastguard and the aircraft from Caernarfon picked up the casualty and took them to hospital.”

The helicopter took the individual to Wrexham Maelor Hospital.

The NEWSAR service is made up of volunteers team members and they do not receive any payment for providing this service to society. You can read more about fundraising and donation to NEWSAR via this link.

Support NEWSAR! We have partnered with Vinyl Bear to bring you a range of clothing and accessories for outdoor activities and more. Take a look at their website! Every time you purchase a NEWSAR branded item they donate to the team.
1/2 pic.twitter.com/W8MeEGsWvj