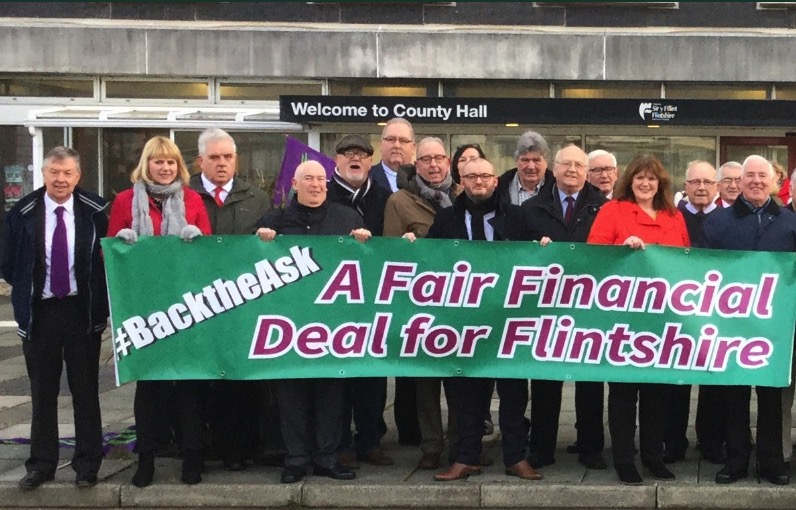 A cross-party group of Flintshire councillors have travelled by bus to Cardiff today to ask the Welsh Government minister for improved funding as they look to plug a budget gap of more than £3 million.

It’s understood around 30 councillors have made the trip however just five of them have been picked to meet ministers at the Senedd.

Deputy Leader of Flintshire County Council Cllr Bernie Attridge (Lab) said he had backed out of the 10 hour round trip just for a “picture outside the Senedd.”

He said on Twitter that “due to Ministers refusing to meet all of the delegation from  @FlintshireCC (Flintshire County Council) I have decided not to travel to Cardiff for 10 hours on a coach just for a picture outside the Senedd.”

Independent councillor Kevin Hughes who called for the lobbying trip to Cardiff is understood to have cherry-picked Council Leader Aaron Shotton (Lab) Janet Axeworthy (Con) Tudor Jones (Lib/Dem) and Ian Roberts (Lab) to make representations to ministers during the day.

It’s a move which has caused some anger amongst councillors with around 10 pulling out of the trip.

A decision on whether to increase council tax in Flintshire by almost 9% has been placed on hold pending the eleventh-hour lobbying bid.

Politicians warned residents were facing ‘desperate’ times as they chose to delay setting a budget last week ahead of today’s crunch visit to Cardiff.

The cross-party group will ask ministers for improved funding as they look to plug a budget gap of more than £3 million.

If they are successful, Flintshire Council officers said the hike for ratepayers could be kept to between six and seven per cent.

However, if their campaign fails then residents could be faced with a rise of £104 per year to their bill for an average Band D property.

If there is no further increase in funding, Flintshire’s ruling Labour administration has advised that a rise of 8.5 per cent will be needed to match spending for the upcoming financial year.

An additional uplift in the authority’s contribution towards the North Wales Fire and Rescue Authority Levy would see rates set at around 8.9 per cent.