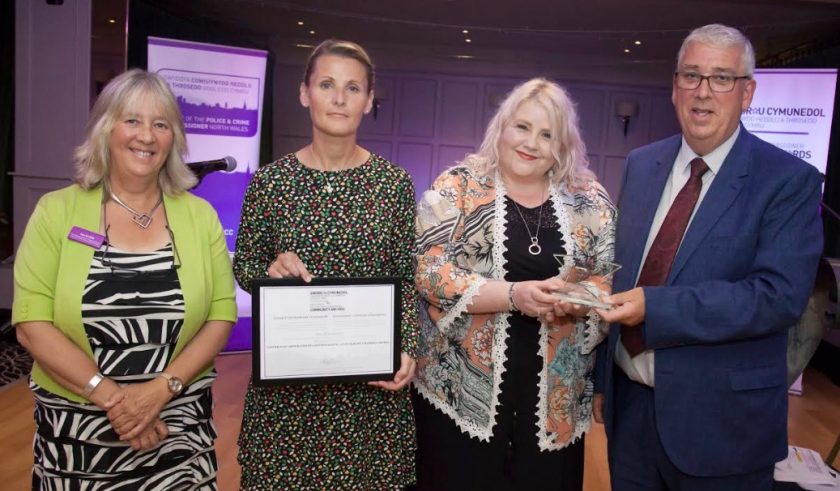 A dedicated charity worker who plays a vital role in keeping vulnerable children safe from trafficking and exploitation has been honoured by North Wales’s policing chief.

Sian Humphreys, who works for Barnardo’s as an Independent Child Trafficking Advocate for Wales, has won the Anti-Slavery Champion title in the North Wales Police and Crime Commissioner’s Community Awards.

The fact that almost 40 per cent of all reported cases in Wales come from the north which has the highest number of referrals to child welfare charity Barnardo’s Independent Child Trafficking Advocate (ICTA) service of any police region in Wales and is evidence of her success in raising awareness of the problem.

She was presented with the trophy by Commissioner Arfon Jones at a special ceremony at the Celtic Royal Hotel, in Caernarfon, when he paid tribute to the crucial work she carries out working in close partnership with the North Wales Police Modern Slavery Team.

They deal with children in danger of being trafficked or who have already been moved in and out of the region and Wales as a whole for reasons including sexual exploitation, forced labour, working on cannabis farms or selling drugs.

Arfon Jones said: “North Wales is just one of four forces in the UK with a modern slavery unit and Sian and Barnardo’s are a key part of that and they work closely together to safeguard children.

“Modern slavery is one of the most insidious and damaging crimes and it all too often slips under the radar but its victims are among the most vulnerable in our society which is why I have made it one of my policing priorities.

“In the past year there have been 124 referrals to the ICTA service in Wales and 49 have been from North Wales which shows the scale of the problem here and the importance of Sian’s work.”

Sian plays a key role in supporting those children to keep them safe and prevent re-trafficking, as well as enabling their voices to be heard so other agencies can provide them with the best possible support.

“Wales in one of the early adopter sites the Home Office selected to provide support to children who are, or are at risk of, being trafficked.

“Child trafficking is the movement of a child for the purpose of exploitation, examples of which includes working in nails bars, kitchens and restaurants for little or no money or forced into criminality such as maintaining cannabis farms.

“There are many more examples in which children are coerced, groomed and forced into exploitation.

“ It does exist in Wales and we are seeing this. I have supported children from Pakistan, Albania, Vietnam and Romania to name a few. I also support many British children, who are trafficked within the UK, so to be clear, children can be trafficked from anywhere for any type of exploitation.

“My role is to walk through the journey with them, supporting them through complex systems such as immigration, criminal justice and social services, ensuring the child’s voice is heard.

“It can be challenging. The exploitation causes significant trauma which take time and support to overcome, however it’s a very rewarding role.

“It’s great to win an award but a lot of it’s down to the positive partnerships developed here and it helps that someone like the Police and Crime Commissioner has put the issue on their agenda.”

Sian’s work to raise awareness in communities and provide training to professionals has resulted in more referrals and an increased number of safeguarded children.

Out of the four current areas that have an ICTA – Wales, Greater Manchester, Hampshire and the Isle of Wight – Sian has submitted the most referrals, a total of 88 so far this year for children 18 and under.

The ICTA adopter sites, Wales, Greater Manchester, Hampshire and the Isle of Wight have all seen a significant amount of referrals and this continues and Sian added: “It’s important to note that modern day slavery and child trafficking is often hidden.

“By working with our partners we’re seeing some successful outcomes for children. The number of referrals is positive but this is only a small fraction of the number of children being exploited. A lot of it is hidden and we need the community to be vigilant.

“I do a lot of work and training with practitioners who work with vulnerable children to support and upskill.

“But we also need to ensure members of the public are aware of the issue. We target places with posters to get people thinking about what is happening in the communities.

“We want them to question whether something seems right and then to share their concerns. We need everyone to work together.”

As part of her role Sian has also helped introduce a new meeting – Missing Trafficked and Exploited (MET) within Flintshire and Wrexham, which provides agencies with information that has enabled them to adapt their processes and interventions with young people as issues are identified much earlier.