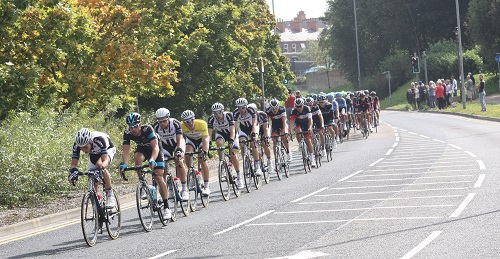 The prospect of the Tour of Britain heading to Wrexham should give residents confidence in its new city status, council leaders have said.

Wrexham is to host the ‘grand departure’ stage of the UK’s largest, most prestigious televised cycling event next year.

In 2015 Wrexham successfully hosted Stage One of the Tour of Britain, and earlier this year hosted the Women’s Tour.

And next week’s Wrexham Council Executive Board meeting will see members briefed on discussions for the elite event to continue returning to the town in 2024 and 2025, as their support is sought for the plan to build a strong relationship with the organisers.

In a media briefing ahead of next week’s meeting, Chief Executive Ian Bancroft and Leader Cllr Mark Pritchard said that securing the event was a sign of the weight city status has given Wrexham. They said it can confidently compete with other cities like Manchester to land such events in a way it has not been able to before.

Reasons for bringing the event to Wrexham are outlined in the report which states: “Since its inception, the Tour Series has benefitted the host venues to the tune of approximately £20 Million net.

“City rounds, with attendances in excess of 10,000 typically generate a net economic impact of at least £400,000 through additional spend in hotels, pubs and café from visitors coming into the city to watch the racing.”

“As the series grows in 2023 and beyond, we fully expect crowds to grow, and the economic benefit to increase dramatically.”

Cllr Nigel Williams, lead member for Economy and Regeneration, will present the report next week.

He said: “Wrexham’s got a proud heritage with sport, we’ve got a wonderful football club but there is still an opportunity to bring nationally recognised sporting events to Wrexham.

“It’s going to be more than a one-day event (2023), there will be activities in the days before and after, children’s entertainment, community races. We can promote healthy living and cycle to work schemes.

“This won’t just be a one-off, it’s something we want to build on every year, to get people into cycling again.”

Chief Executive Ian Bancroft said he hopes Wrexham will become a major place for cycling in the UK.

He said: “It builds on the work we put in to have the women’s tour here earlier this year, and in terms of acting as a city and a City of Culture, building long-term relationships with key events is really, really critical.

“Cycling is healthy living, active travel and we’re one of the few places where you can do road, city centre, off-road and mountain biking. We can provide all potential categories of cycling.

“We’re not just having events for the sake of events, we’re actually doing development work around cycling.”

He added: “It is something that inspires people to cycle so from a sports development point of view, that’s something we build on.

“We’re committing over a three-year period.

“We are acting in an environment where we can now do things that other places with equivalent titles could do which we couldn’t do before.”

Council leader Cllr Mark Pritchard added: “We’re very ambitious, we want to put major events on in the city centre and across Wrexham. This is just one of many.”

Speaking more widely about what city status actually means to Wrexham, Mr Bancroft, likened it to places such as Nottingham and Edinburgh, cities with towns still at their heart.

He said: “The county borough has the rights of a city. It’s how we use those rights that’s important.
“It’s not a badge we were after, it’s about raising aspiration, acting on a different level, being able to get other economic opportunities like the Tour series.”

Cllr Pritchard added: “I saw somebody say on social media that “Wrexham is a city with a town at its heart” and I think that’s right, it sums it up nicely.”