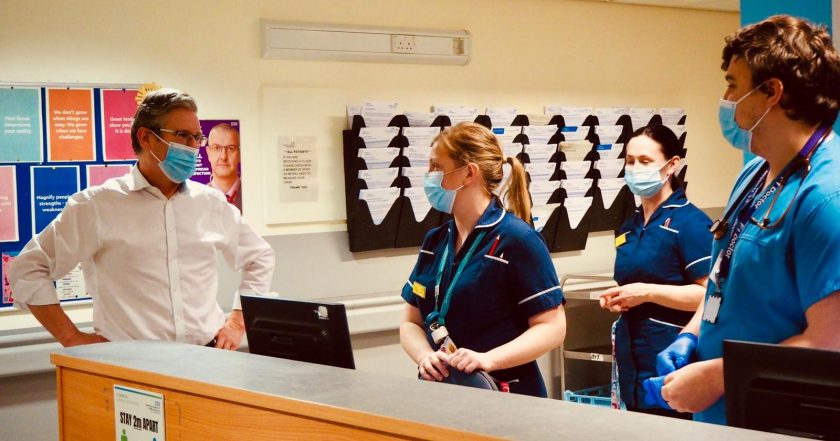 Sir Keir Starmer has ducked a question over Labour’s record on running the NHS in North Wales.

Challenged over the way Betsi Cadwaladr University Health Board spent more than five years in special measures under close watch from the Welsh Government, the Labour leader did not address whether it meant voters could trust his party on health.

He instead praised Wales’ First Minister Mark Drakeford for his handling of the coronavirus pandemic, contrasting his leadership positively to that of UK Prime Minister Boris Johnson.

Speaking at the launch of his party’s online campaign for the upcoming Senedd elections, Sir Keir claimed it was an example of “the difference that Labour makes in power”.

He told the Local Democracy Reporting Service: “I think after the work that Welsh Labour, Mark Drakeford and others have done in the last 12 months, it’s very important to reflect on how they’ve dealt with the pandemic.

“I hope that when people go to the polls this May, they’ll reflect on the way that he has led Wales through this, and I would ask them to give him the tools to finish the job.”

Betsi Cadwaladr left special measures in November last year after a total of 1,996 days under the highest level of Welsh Government monitoring.

Health Minister Vaughan Gething said at the time that he had received “clear advice” that the escalation status of the health board should change to targeted intervention.

However, the chief officer of the North Wales Community Health Council said he believed it should have stayed in special measures for longer, with concerns remaining over mental health services and other areas.

During the campaign event, Sir Keir was also asked about comments made by Mr Drakeford last week that the United Kingdom “is over” and a new union is required.

“If the debate, anywhere, particularly in Scotland is simply between the status quo and independence, then it’s the wrong debate.”


Tweets by Deesidedotcom
Wednesday May 25th 17:07