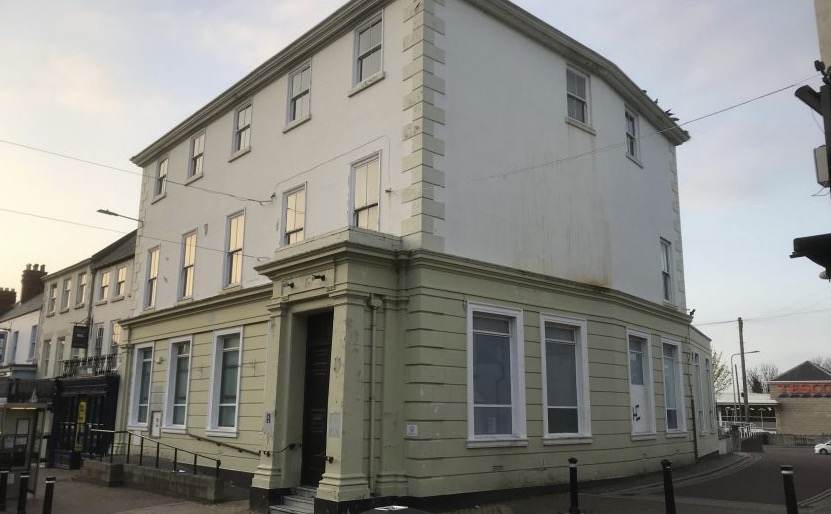 A former HSBC branch in Holywell could be turned into a shop and apartments if new proposals are approved.
The Grade II-listed building on the town’s high street has stood empty since the bank was closed in May, 2017.

The decision was taken as HSBC said customers were increasingly choosing to bank online.

However, it led to frustration as account holders in the town were forced to travel nine miles away to Mold to access services.

A previous application to convert the building into ten flats was submitted by North Wales Development in late 2019, but was later withdrawn.

The same company has now entered plans to create either a shop or office space on the ground floor of the three-storey building, with six apartments on the rear ground floor and upper floors.

In a heritage impact statement put forward to Flintshire Council, representatives said it would help to rejuvenate the site.

They said: “The property has been unoccupied for approximately four years when it ceased being used as a bank.
“Its condition is slowly deteriorating, leading to ongoing decline that requires timely intervention to prevent further damage and loss to the historic fabric of the building.

“As this is an important building in a prominent location on the High Street, it is detrimental to the commercial area lying empty.

“Therefore, bringing it back to full use will be beneficial to the street, adding vibrancy to the town centre and securing the future of an important historic asset.”

The property is believed to date from the mid-18th century when it was originally built as a pub called the White Horse Inn.

The building was used as one of the posting houses on the London to Holyhead road and Queen Victoria, who was then a princess, stayed there in 1832.

It was remodelled in 1871 when it was converted into a bank house and office.

In their statement, the developers added: “The proposal is to change the use of the building from a vacant bank into six residential apartments on the rear ground, first floor and second floor with one retail/office unit to the front ground floor facing the High Street.

“This approach has been taken as the only viable option to invest in this building as there is little demand for commercial/office accommodation of this size at present in the town centre and decreasing the commercial floor space with residential elsewhere will provide a use to satisfy the current market conditions.

“The proposals have been designed sympathetically to have as minimal impact as possible on the character respecting its listed status and making conservation improvements where possible.”

Comments are being invited on the application via the local authority’s website, with a decision expected at a later date.


Tweets by Deesidedotcom
Wednesday May 25th 17:49