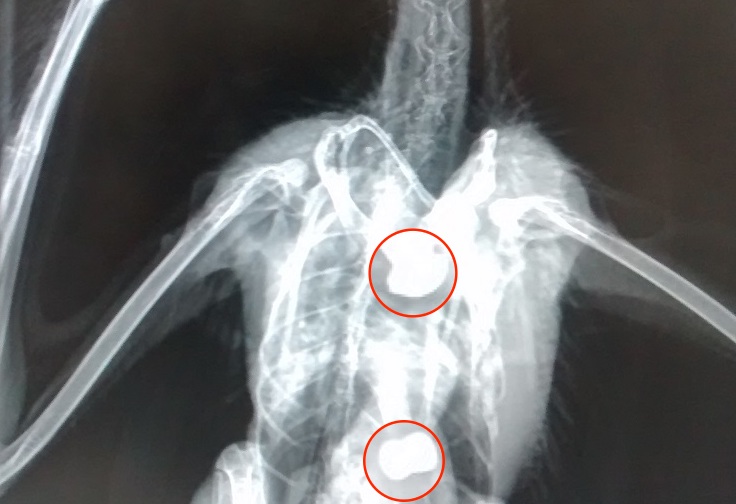 RSPCA Cymru is calling for mandatory licensing of airguns, as shocking new figures show an increase in calls about attacks on animals using such weapons in Wales.

The animal welfare charity will be making the recommendation as part of a submission to the UK Government’s current review of the regulation of air weapons following two serious incidents involving children. ‌﻿​﻿‌﻿‌﻿‌﻿​﻿‌﻿‌﻿‍﻿‌﻿​﻿‌﻿‌﻿‌﻿​﻿‌﻿​﻿‍﻿‌﻿​﻿‌﻿‌﻿‌﻿​﻿‌﻿​

In 2017 there were 70 airgun attacks reported to RSPCA Cymru, the local authority areas where incidents have been the most prominent are Conwy (8) Carmarthenshire (7) and The Vale of Glamorgan (10). In February 2017 Rusty the cat – from Barry – died on a veterinarian’s recovery table after being shot by an air rifle. An x-ray scan revealed a pellet in the cat’s back, and – sadly – Rusty did not make it through the recovery stages following surgery. ‌﻿​﻿‌﻿‌﻿‌﻿​﻿‌﻿‌﻿‍﻿‌﻿​﻿‌﻿‌﻿‌﻿​﻿‌﻿​﻿‍﻿‌﻿​﻿‌﻿‌﻿‌﻿​﻿‌﻿​

“The review around the regulation of air weapons is welcomed by the RSPCA and we hope our submission to the UK Government will help demonstrate the scale of calls to us every year and remind decision-makers it is important to protect animals as well as people.“It is heartbreaking that such a tragic incident has sparked this review and our thoughts go out to Benjamin’s family and friends, but we hope that any future regulation of these weapons in England and Wales will better protect people and animals. “The RSPCA has long been calling for stricter controls over airguns as well as better education and explanation of the law for those buying one. Our 24-hour cruelty hotline receives hundreds of calls every year reporting airgun attacks on animals. “Animals can suffer horrendous injuries and often die as a result of airgun attacks and these weapons are potentially extremely dangerous for people as well.” ‌﻿​﻿‌﻿‌﻿‌﻿​﻿‌﻿‌﻿‍﻿‌﻿​﻿‌﻿‌﻿‌﻿​﻿‌﻿​﻿‍﻿‌﻿​﻿‌﻿‌﻿‌﻿​﻿‌﻿​

The RSPCA and British Association for Shooting & Conservation plan to stage a joint conference this spring to bring together key stakeholders from industry, the police, animal charities and more to try to identify the scale of the problem and find practical solutions. ‌﻿​﻿‌﻿‌﻿‌﻿​﻿‌﻿‌﻿‍﻿‌﻿​﻿‌﻿‌﻿‌﻿​﻿‌﻿​﻿‍﻿‌﻿​﻿‌﻿‌﻿‌﻿​﻿‌﻿​

Legislation in Scotland and Northern Ireland requires anyone who possesses, purchases or uses an air weapon to have a licence.Incidents in which an animal has been shot or targeted by someone using an airgun should contact the RSPCA’s national cruelty line on 0300 1234 999.To support the RSPCA’s work and help our officers continue investigating animal cruelty please donate by visiting www.rspca.org.uk/winterappeal. ‌﻿​﻿‌﻿‌﻿‌﻿​﻿‌﻿‌﻿‍﻿‌﻿​﻿‌﻿‌﻿‌﻿​﻿‌﻿​﻿‍﻿‌﻿​﻿‌﻿‌﻿‌﻿​﻿‌﻿​