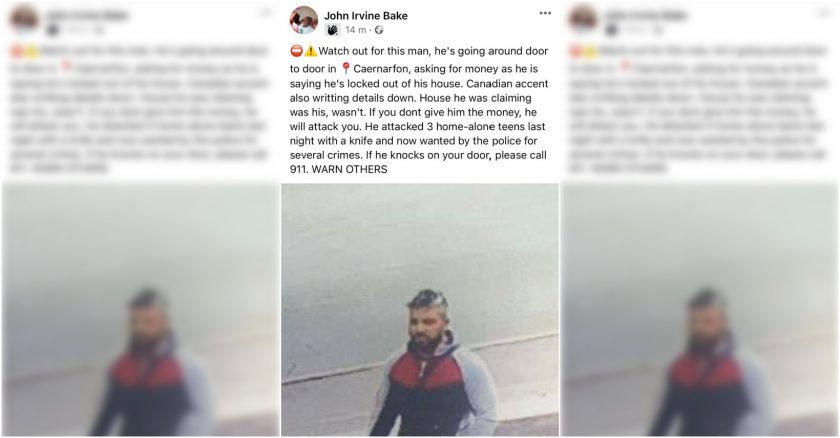 Police have issued an alert over fake Facebook posts circulating in community groups in North Wales.

The false posts warn of a man going door to door asking for money after claiming to have been locked out of his house.

The hoaxers said the man, a picture of whom is supposedly attached, had been attacking people who don’t give him money.

The posts have so far been shared in community groups in Wrexham and Caernarfon.

However, there are a few tell-tale signs that the information is not all it seems as it instructs people to call 911 – the US emergency code – if they see him.

It’s unclear who is behind the posts and why they are sharing them, but North Wales Police have moved to allay any concerns.

They said: “We are aware of concerns regarding warnings circulating on social media regarding the Caernarfon area.

“As you will see from the below pictures, the fake posts are being spread in different areas of the force and are without foundation.

“Please be careful what you share on social media if you don’t know the source of the information.

“Whilst these platforms can be great communication tools, this is dependant upon the accuracy of what is shared!”

In relation to the posts in Wrexham community groups, Inspector Luke Hughes said: “I have been made aware of nonsense circulating on social media… or Fake News as a certain ex-president would say.

“Please take whatever you read on social media with a large dose of scepticism.

“It is littered with many people some real and some not, who will tell you all manner of rubbish for a variety of objectives, none of which will ultimately benefit you in any way.

“Block the user, remove them from your forum and generally ignore their nonsense.”