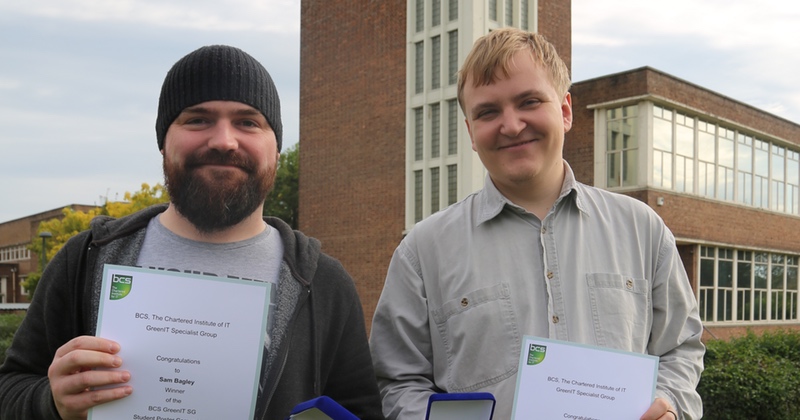 Fresh ideas about how the ‘Internet of Things’ can be used to benefit the world have won top prizes for computing students in an international competition.

Third-year Computer Science students Sam Bagley and Joshua Hayes at Wrexham Glyndwr University took first and second place in the Green IT 2019 competition, run by the British Computer Society (BCS) – the chartered institute for IT.

The competition, open to students across the world, asked for suggestions for the category of ‘a New Application of the Internet of Things That Benefits Society.’

The ‘Internet of Things’ is a computing term which describes how devices can be embedded in everyday objects, allowing them to send and receive data.

Each participant in the competition was asked to put forward a single PowerPoint slide distilling their ideas, Sam and Joshua’s proposals were named as first prize winner and joint second prize winner respectively.

Sam’s entry was for an network of climate data stations – allowing the public to set up their own cheap, easy-to-use micro weather station kit which would feed into an international database, allowing researchers to gather weather information from around the world.

He said: “My idea was for these small weather stations which could use big data to predict and analyse weather events – such as natural disasters – and my slide explained how an open source platform could be used to help people to do that.

“Winning was both surprising and pleasant – it is great to be recognised by a body like the BCS.”

Joshua’s entry was a proposal for an autonomous fire and drone rescue network which would operate in areas known to pose risks to human life – such as those prone to forest fires or earthquakes.

“My proposal was for a network of remote drone towers that could survey remote areas, detect injured individuals, and provide survival packs to help them until rescuers arrived,” he explained.

“Securing second place wasn’t something I was expecting – but it felt good. It was nice to get a medal, as well as the certificate – getting an actual award makes it feel real.”

Senior lecturer in Computing, Denise Oram, said: “It is great to see Sam and Joshua’s entries securing these British Computer Society prizes – in a competition which drew entrants from across the globe.

“Both their proposals were fascinating contributions which examined some of the ways technology can be applied to transform our lives – those real-world applications of technology are at the heart of what we teach here at Glyndwr.”