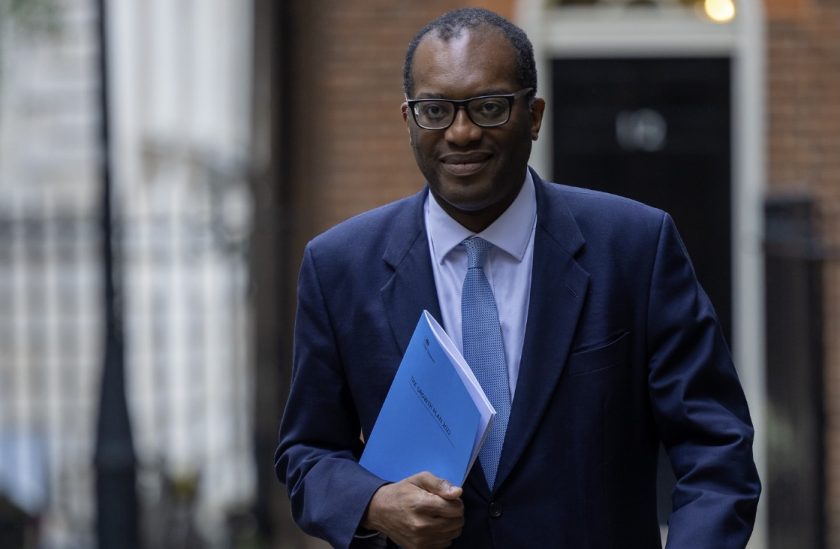 The Chancellor has announced big tax cuts, changes to stamp duty, scrapping of bankers’ bonuses and the tightening of rules for some people claiming Universal Credit.

Kwasi Kwarteng has confirmed that Universal Credit rules will be tightened in a bid to push more people into work.

During his ‘mini budget’ speech today in the Commons Kwasi Kwarteng also announced a surprise slash on income tax for the highest earners.

He also said he is “going to get rid” of the cap on bankers’ bonuses.

“All the bonus cap did was to push up the basic salaries of bankers, or drive activity outside Europe.”

Universal Credit Claimants who earn less than the equivalent of 15 hours a week at National Living Wage will be required to meet regularly with their Work Coach and take active steps to increase their earnings or face having their benefits reduced.

This change is expected to bring an additional 120,000 people into the more intensive work search regime.

Jobseekers over the age of 50 will also be given extra time with jobcentre work coaches, to help them return to the jobs market.

This #MiniBudget embeds unfairness across the UK.

The UK Government should be offering meaningful support to those who need it the most. Instead, they’re giving tax cuts to the rich, bonuses to bankers and protecting the eye-watering profits of energy companies.

“Rising economic inactivity in the over 50s is contributing to shortages in the jobs market, driving up inflation and limiting growth.” The UK government has said.

Universal Credit claimants working up to 15 hours a week at the national living wage to meet a work coach regularly and take active steps to increase their earnings.

Currently, Universal Credit claimants working up to 12 hours a week at the National Living Wage risk having their benefits reduced if they do not take steps to increase their earnings and meet regularly with a work coach.

The move will bring an additional 120,000 benefit claimants into the “intensive work search regime”. Benefits can be withdrawn from those who fail to comply.

The Chancellor announced he is also cut stamp duty, which is devolved in Wales.

Currently, in Wales, Land Transaction Tax on residential property purchases over £180,000 up to and including £250,000.

The UK Government said: “The Welsh Government will receive around £70 million over the same period as a result of the change to Stamp Duty Land Tax”

The Chancellor announced the 45% higher rate of income tax abolished.

“They reduce the incentive to work, invest, and start a business.”

“And the higher the tax, the more ways people seek to avoid them, or work elsewhere or simply work less…”

“…rather than putting their time and effort to more creative and productive ends.”

He said: “Take the additional rate of income tax.”

“At 45%, it is currently higher than the headline top rate in G7 countries like the US and Italy.”

“And it is higher even than social democracies like Norway.”

“But I’m not going to cut the additional rate of tax today, Mr Speaker.”

“I’m going to abolish it altogether.” He said.

“This will simplify the tax system and make Britain more competitive.”

“It will reward enterprise and work.”

“It will incentivise growth.”

He also announced that the government will cut the basic rate of income tax to 19p in April 2023 – one year early.

“That means a tax cut for over 31 million people in just a few months’ time.”

“This means we will have one of the most competitive and pro-growth income tax systems in the world.” He said.

Following announcements from the Chancellor, Alyn and Deeside Senedd Member Jack Sargeant said: “The Tories promised to level up and transfer money to working class communities like this one.”

“Instead, huge bonuses are back for the City of London and nothing for Alyn and Deeside.”

“This is disgusting, the Tories don’t care that people are suffering and this budget proves it”

Rebecca Evans, the Minister for Finance and Local Government in the Welsh Government, said: “Today’s announcements show the UK Government is heading in a deeply worrying direction, with misplaced priorities leading to a regressive statement that will embed unfairness across the United Kingdom.”

“Instead of delivering meaningful, targeted support to those who need help the most, the Chancellor is prioritising funding for tax cuts for the rich, unlimited bonuses for bankers, and protecting the profits of big energy companies.”

“Instead of increasing funding for public services in line with inflation, we get a Chancellor blithely ignoring stretched budgets as public services find their money is simply not going as far as it did before.”

“Instead of a comprehensive growth plan we get a missed opportunity to invest in the future. We could have seen a bold programme of investment in new green energy, tackling rising bills and improving our energy security in the long-term to help stop this kind of crisis happening again.”

“Here in Wales we have provided around £400m to help people pay essential bills, including targeted support for those with lower incomes. But the majority of key levers for support lie in the hands of the UK Government and we simply cannot afford more of the same.”

“We cannot afford a UK Government that does not understand or care about the severe challenges people are facing.”

“We were promised a statement that would ensure immediate support would be delivered, but this falls well short of what was needed.”

Welsh Conservative Shadow Minister for Finance, Peter Fox MS said: “Today shows that the UK Conservative Government has a comprehensive plan to provide a sharp boost to the economy by putting cash back into people’s pockets. Labour in Wales has the power to cut taxes in Wales but chooses not to.

“This Conservative Prime Minister is putting aspiration, opportunity and growth at the heart of the economy. Yet, Labour Ministers continue their reckless tax and waste policies, from implementing a tourism tax to wasting £100 million on more politicians in Cardiff Bay.

“Mark Drakeford needs to take a leaf out of Liz Truss’ book and take immediate action to support hard-working people and struggling businesses, stimulating the Welsh economy rather than stifling it.

“Let’s not forget that Labour admitted they didn’t know what they were doing on the economy – the Chancellor has delivered a clear plan for growth today, Labour need to follow it.”