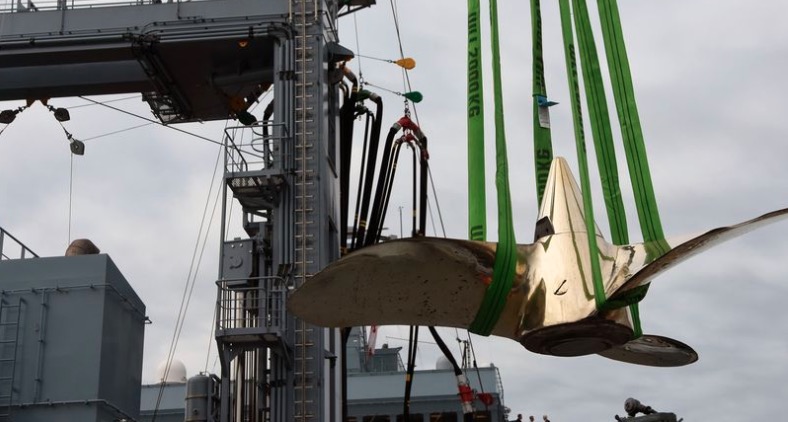 An Historic U-Boat propeller is going back to Germany following a handover in Plymouth.

The U-Boat propeller has been handed back to the German Navy following a joint operation between the Maritime & Coastguard Agency, Historic England and North Wales Police.

It is one of two propellers found at a storage unit in Bangor, Gwynedd in September 2017 that were believed to have been illegally recovered from the wreck of the submarine UC-75 by a diver.

The German submarine UC-75 was built and launched in 1916 and credited with sinking 58 ships including two warships and damaging a further eight, either by torpedo or by mines laid.

UC-75 was rammed and sunk by the Royal Navy destroyer HMS Fairy in May 1918. Seventeen German crew members died and 14 survived.

On Friday, one of the propellers started its journey back to Germany, with the second one destined for display at the Royal Navy Museum in Portsmouth.

It was formally handed over on board FGS Bonn which is currently based in Plymouth for training.

In November, two Remembrance ceremonies, one in Germany, one in the UK will be held at the same time to honour the fallen of both sides.

“These propellers tell a story of bitter conflict and human loss, but also of bravery, selflessness and love. It is fitting that they will now serve to remind citizens in both our countries of the realities of war and the personal sacrifices that inevitably follow.

We in the MCA are proud to play our part in honouring that remembrance.”

“The propeller witnessed the struggle for life 100 years ago. It will come home. It will be officially handed over to the Naval Museum in Laboe on the occasion of Armistice Day in November.

The story of UC-75 is ending in a message of reconciliation and hope – the fruit of the close partnership between our two nations that has brought us together here today.”

Police executed a warrant at property on Anglesey last Septemeber, which led to another property in Bangor being searched where the items were discovered.

A man has since recevied a formal caution in relation to the find.

“We are pleased that both propellers are now en route to appropriate homes in the UK and Germany.

Cleaning the propellers was a task taken on by Paul Stevens, an Instructor at Southampton College Marine Skills School, who together with his students spend over 50 hours cleaning the first one in time for the handover today.