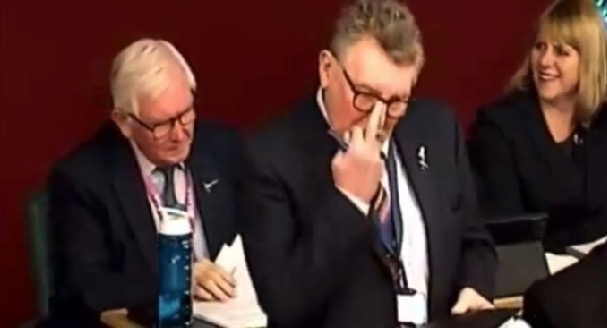 A senior Flintshire County Councillor was kicked out of a full council meeting on Tuesday after refusing to withdraw a comment aimed at another councillor.

Cllr Derek Butler, the elected member for Broughton South, was responding to the council’s budget proposals which were being debated in the chamber ahead of a crucial vote on Council Tax.

Cllr Butler was on his feet responding to the council’s proposed budget for the forthcoming year and the challenges it faced on a ‘year by year’ basis.

The councillor, who is also the Cabinet Member for Economic Development, was alluding to the lack of a long terms public sector spending plan from Westminster.

He said: “We’re all eagerly waiting for this largesse from the (general) election that is going to wash all over the country, with all kinds of fiscal packages being promised,” in reference to spending proposals by the Conservative Party.

The Chancellor (Sajid Javid) has just been sacked for not being free enough with this largesse and Dominic Cummings has sacked one of his free thinkers, eccentric minds he recruited into his department.

Perhaps we could send Cllr Tony Sharps there to serve as a free thinker, to actually galvanize some of the debates there when you are not advising Mr Wetherspoons of his business plans.”

Cllr Sharp reacted by shouting across to Cllr Butler which brought some laughter from those sat close by.

The reference to Wetherspoons relates to a tribute paid by Cllr Sharp earlier in the meeting to the late Cllr Ken Iball who died recently following a short illness, he was 91.

Cllr Sharp reminisced on how he used to meet Cllr Iball in the Wetherspoons in Mold.

The Independent Councillor later went onto to slam the Welsh Assembly and its perceived lack of support for North Wales which caused a bit of a stir within the chamber.

Chair of the Council Cllr Marion Bateman called on Cllr Butler to withdraw his comment to Cllr Sharps, she said, “I’m very sorry, I think you should take that back, I don’t think that’s very appropriate.”

Mr Butler, a Labour councillor, responded by saying, “if he can advise a Chancellor, he can advise a businessman, that’s all I’m saying, there’s no need to get precious about this.”

Chair of the Council interjected, she said, “excuse me councillor, I asked you to take something back, are you going to take it back?”

Cllr Butler responded by saying he was not going to take it back, he was then asked to leave the chamber which he did.

Leader of the Flintshire Independents, Cllr Bernie Attridge has now called on Cllr Butler and “others who found it so funny” to consider their positions.

“In all my years in County Hall I’ve never seen a chairman throw such a senior councillor out of the chamber.”