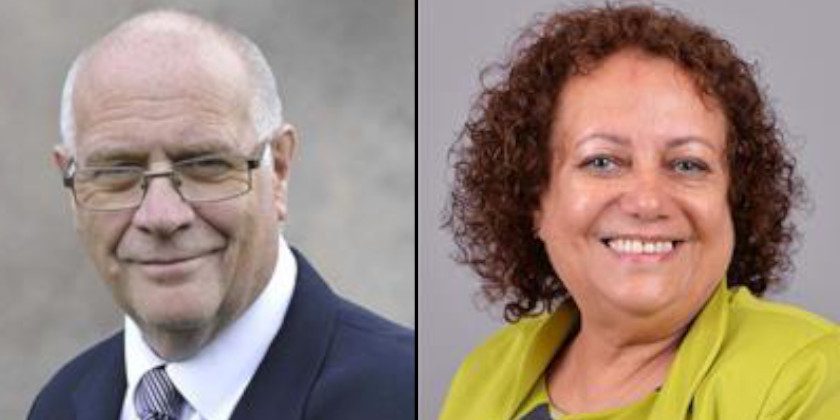 Plans to redraw ward boundaries in Flintshire could ‘throw a spear’ between two neighbouring communities, it’s been warned.

Last week, the Local Democracy and Boundary Commission for Wales unveiled revised proposals to reduce the number of councillors in the county from 70 to 65.

The changes would also see the amount of electoral wards slashed from 57 down to 39.

The recommendations include linking the village of Hope up with Higher Kinnerton to create a new area represented by two councillors, while neighbouring Caergwrle would join with Llanfynydd.

It comes despite arguments from the Labour representatives for Hope and Caergwrle that the villages should be united to create a single ward due to their historic links.

Cllrs Dave and Gladys Healey warned community cohesion would be lost if the plans move forward.

Gladys, who represents Hope, said: “I am extremely disappointed in these proposals.

“The commission has completely ignored representations made by both county councillors for Hope and Caergwrle wards, Flintshire County Council and also the Deeside Conservative Association.
“There was agreement across the political spectrum that Hope and Caergwrle should be kept together.

“This proposal drives a spear through the heart of our community.”

The two villages are situated either side of the River Alyn in an area of low-lying land beneath Hope Mountain.

They are said to be so closely connected that the expression ‘Live in Hope and Die in Caergwrle’ has earned its place in popular culture.

Caergwrle councillor Dave Healey said the areas are also mentioned jointly in the titles of local clubs and societies, while both wards form part of Hope Community Council.
He has also voiced his opposition to the proposed alterations.

He said: “The commission has just tried to do a quick fix to get evenly balanced wards in terms of the number of electors.

“It has ignored the need to retain community cohesion and has failed to recognise how things work on the ground.

“There are alternative ideas which would involve the movement of smaller numbers of electors to balance the wards and we will be pressing for these alternatives to be adopted.

“The problem of a deficiency of electors in Caergwrle would be solved by making Hope and Caergwrle a two-member ward.

“That is the obvious course of action which would keep our community together.”

The commission said its plans were designed to achieve a balance of one councillor for every 1,836 eligible voters in the county.

It said it hoped the arrangements would provide more effective local government in Flintshire.

Despite acknowledging the suggestions made by the two married councillors, in a report officials added that they believed their own recommendations would best address the levels of variance in council ward sizes.

They said: “Councillor Dave Healey and Councillor Gladys Healey both submitted representations that supported the option to combine the existing electoral wards of Caergwrle and Hope to form a new electoral ward.

“The commission considered the representations received; however, the commission is of the view that it would not be appropriate to retain the existing electoral arrangement for Higher Kinnerton due to the high level of electoral variance.

“The commission also considered the boundary changes as proposed by the council however, as these changes contained such a small number of electors, it is not within the scope of the review and the commission cannot make any proposals including such changes.”

Both councillors are encouraging residents to take part in a consultation on the boundary changes, which runs from Thursday until November 27, 2019.

Comments can be made by e-mailing consultations@boundaries.wales or by writing to; Local Democracy and Boundary Commission, Hastings House, Cardiff CF24 0BL.