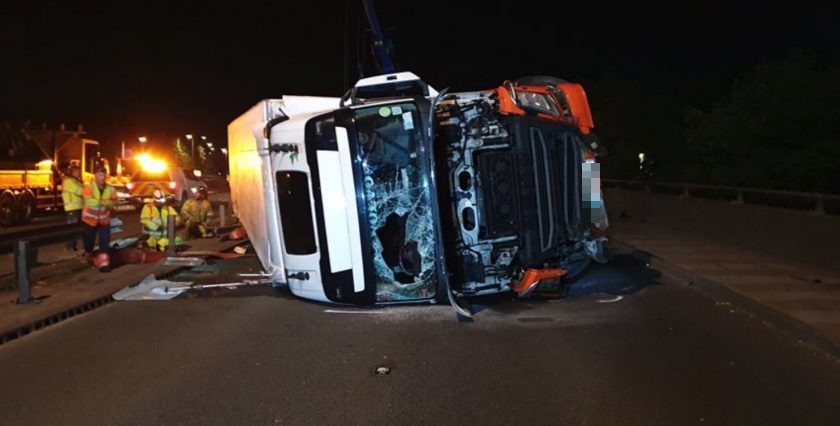 Police have said the driver of an HGV which overturned on the A494 in Queensferry last night has been arrested on suspicion of drink driving.

Emergency services were called to the incident on the westbound side of the dual carriageway at around 9.40pm.

A spokesperson for North Wales Police said officers were called to “a single vehicle road traffic collision involving a Volvo articulated lorry on the A494 Queensferry/Ewloe at 21.39.”

No serious injuries were reported and the driver, 44 was arrested after failing a breath test.”

Fire crews from Deeside and Buckley attended the incident, the ambulance service say they sent an emergency ambulance and one rapid response vehicle.

A Welsh Ambulance Service spokesperson said: “We were called on Wednesday 20 May at approximately 21:42 to reports of a road traffic incident on the A494, Queensferry.

We responded with one emergency ambulance and one rapid response vehicle. One patient was transported to the Countess of Chester Hospital.”

Recovery crews cleared the HGV from the scene overnight but the road has remained closed this morning whilst a bridge inspection and repairs take place.

A large section of the central barrier was damaged in the incident. A diversion route has been operation but as of 11.30 the road was in the process of being reopened.