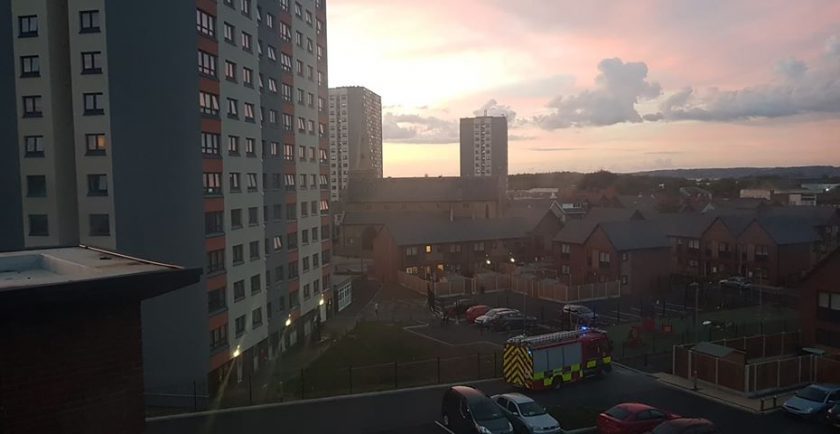 A fire at a high-rise block of flats in Flint has been successfully extinguished thanks to an effective sprinkler system.

North Wales Fire and Rescue Service crews were called to a report of a fire at Bolingbroke Heights, Flint yesterday evening at 17.49hrs – and appliances from Flint, Deeside and Holywell were mobilised to the incident.

Firefighters rescued a man in his 70s from a heavily smoke logged flat within the building. He received a precautionary check for smoke inhalation at the scene.

The fire was extinguished quickly by the sprinkler system and was confined to a cooker within the flat.

In 2016 and working closely with North Wales Fire and Rescue Service, Flintshire County Council retro-fitted a sprinkler system throughout the whole of the three blocks at Bolingbroke Heights, Richard Heights and Castle Heights in Flint.

Paul Scott, Senior Fire Safety Manager at North Wales Fire and Rescue Service, said: “This incident clearly highlights the importance of sprinklers in helping to avoid the spread of fire.

“The fast activation of the sprinkler system helped to protect the occupier of the flat from serious harm, as well as avoiding damage to his flat and major disruption to the remainder of the building and its occupants which may have been caused had the fire spread.

“In Wales we have led the way in the promotion of fire safety and the protection of our residents and businesses – commercial and domestic sprinkler systems deliver benefits that are far greater than the cost of their installation and maintenance.

“Sprinkers are an extremely effective safeguard against fire, protecting people, firefighters, jobs, homes, businesses, the economy and the environment.”