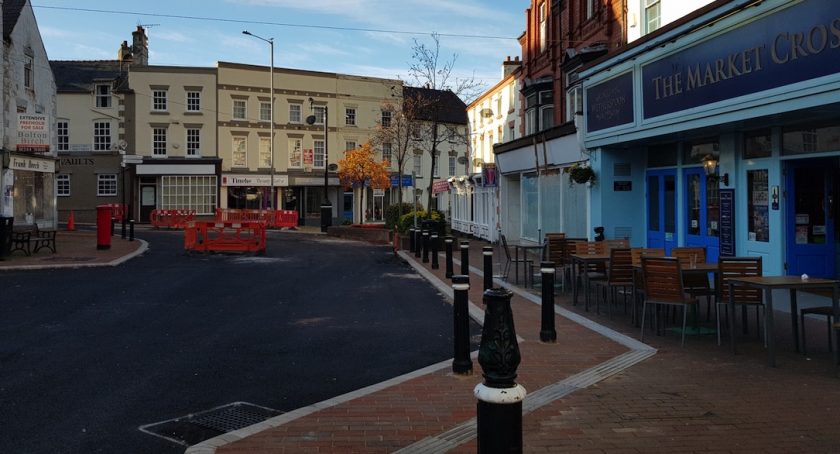 Work to open Holywell’s high street to traffic is on course to be completed in time for the town’s Christmas events, it’s been revealed.

Last year, a vehicle-free zone in the main shopping area was lifted for the first time since 1992 in a bid to boost trade.

It was decided the move would be made permanent after a six-month trial was hailed as a success by business owners and improvements got underway in late August.

Flintshire Council’s deputy leader Carolyn Thomas has now provided an update on the £800,000 scheme, which she said was progressing well and would be finished by the end of November.

She said it would deliver a number of benefits for the town including the provision of short stay parking for shoppers.

She added visitors using other modes of transport would also see improvements with new cycle routes forming part of the development.

The Labour councillor said: “The de-pedestrianisation of Holywell town centre is on track to be completed at the end of November in time for the Christmas events.

“However, de-pedestrianisation is just part of the scheme, there will be other features to enhance the area, improve vitality and access, not just for cars.

“We are also adding active travel links with a cycle path through the town which links to other cycle routes including the new one through the Greenfield Heritage Valley and we will be installing four sets of cycle racks so residents can leave their bikes secure as they visit the town’s shops, cafes and other facilities including our Connects office.

“There will be places for two taxis and we will still maintain the community bus bringing residents to the town.

“There will be new benches, bins, heritage street lighting and a gateway feature on entrance to the high street to further enhance it and there will be canopies at tower gardens as an events area.”

There was originally uncertainty over whether the council would be able to achieve the full scale of its ambitions for Holywell after an intial bid for Welsh Government funding was turned down.

But the Cardiff administration later announced it would provide £474,000 to support the scheme after it went to a ministerial decision.

Money has also been provided by the local authority and town council to allow it to come to fruition.

It followed warnings from business owners that they could fold if the street remained pedestrianised.