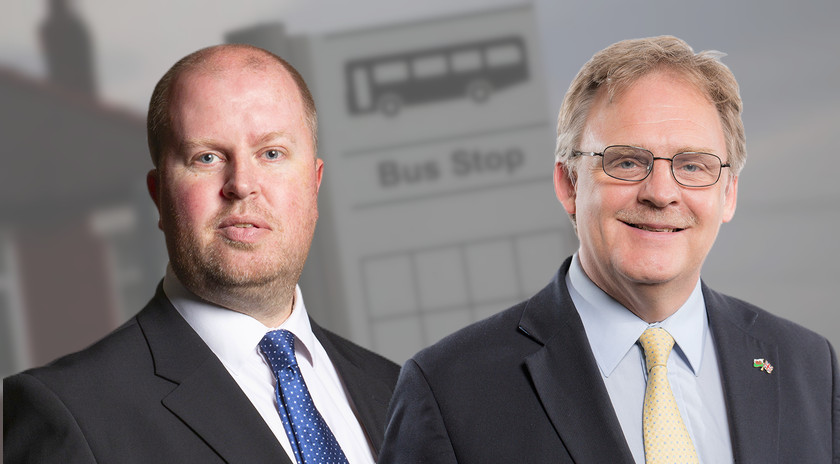 Two Conservative politicians have called on Flintshire County Council to rethink its policy on free school transport following changes to its eligibility criteria.

MP for Delyn, Rob Roberts and Member of the Senedd for North Wales, Mark Isherwood want to see the changes reversed after Flintshire Council clamped down on the number of children entitled to use buses without charge.

Mr Roberts said he has met with council officials to express his concern “after the authority decided to enforce a policy determining access to transport based on walking routes – more strictly.”

He said: “Covid-19 has wreaked havoc with access to vital education.  For months, many of our youngsters have not been able to go to school because they were effectively closed – now some of them are facing yet another problem in that free transport to get them there is not available.”

Mark Isherwood MS said the council’s interpretation of the Welsh law on school transport is “bizarre especially given the seriousness of this for the pupils and families involved.”

Whilst distances below this are referred to as ‘walking distances’, local authorities are under a legal duty to assess these routes using the risk assessment procedure outlined.

A route is only then considered to be ‘available’ if it is safe for a learner to walk. If a route is not ‘available’, the local authority still has a duty to provide the learner with free transport to and from their ‘nearest suitable school’.

Has the Council followed this procedure and, if it has, how can it claim that the routes it has selected are safe for children to walk?”

Mr Roberts says families have told him of instances where their child has been accepted into the school of their choice – “only for the Council to then deny them access to free transport.  They are also worried about safety issues the changes bring.”

Council rules state that pupils qualify for free transport to the nearest suitable school based on a walking route mapped out by the authority’s own system.

Council officials have told him that the decision was made to strictly enforce this policy in 2018 to save money.

The Delyn MP added: “I understand the need for the council to balance its books and spend money effectively – but common sense should prevail.  Families should not be facing additional challenges getting their children to school in what are already incredibly stressful times.”

Cllr Carolyn Thomas, Flintshire Council’s Cabinet Member for Streetscene said the council has a “clear and consistent policy, and commits considerable financial resources to enabling pupils and students to travel from home to school.”

“Our policy is fully compliant with Welsh Government national guidelines.” She said.

The Cabinet Member said any changes to the national guidelines which might extend eligibility and increase the number of pupils qualifying for free school transport “in the way in which the MP and MS appear to be demanding” would have a “significant impact on budgets and could only be achieved with national funding.”

She suggests “the MP and MS redirect their demands to Welsh Government.

We cannot be expected to fund local flexibilities to national policy from Council Tax.”

Mr Roberts says he has sent a Freedom of Information request to the council “asking them to clarify their policy, the financial assessment for applying the policy, identifying the walking routes it states, and the assessments they have undertaken of the walking routes as required by the Welsh Government.”

“Home to school transport is provided to any secondary school pupil or student residing more than 3 miles from their nearest appropriate school, and 2 miles for primary pupils.

The policy is consistently applied in all cases and no services which fall within this policy have been withdrawn by the Council.” Said the Chief Officer.

“Whilst the service is free to eligible pupils, there is a significant cost to the Council for providing the service. Every transport place costs around £750 per pupil, per year to provide.

A consistent policy to set out eligibility for a free service essential. This provides parents with assurances that their application will be considered fairly, and within clear criteria.”

In these circumstances there will always be a ‘line on the map’, either side of which defines whether pupils receives transport or not.

If we were to apply local flexibilities then the policy will be open to challenge by other parents not receiving free school transport for their children and we will have no control.” He said.

Mr Jones said that recommended walking routes to school from communities are reviewed regularly to ensure they are safe, “and any maintenance works necessary along the route are prioritised and completed as resources become available.”

In doing this it is made clear – at the point of applications being made for admission – that organising travel from home to a school which is outside of the 3 mile limit or to a school other that the nearest appropriate school, will be parental responsibility.” He added.

Rob Roberts has also launched a resident’s survey on his website where families can contact him about this issue. www.rjroberts.co.uk/campaigns/free-school-transport