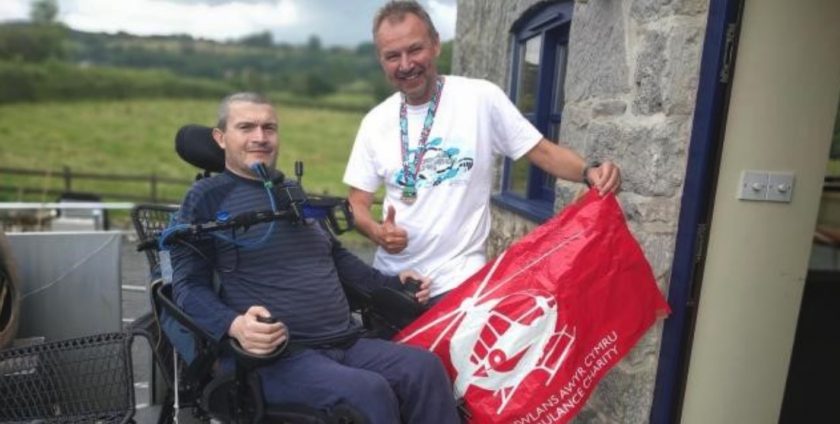 A man from Flintshire is aiming to give back to a charity who saved his life following a serious accident.

Mark Steene from Llanfynydd in Flintshire was rescued by Wales Air Ambulance following a serious road traffic collision near Llangollen four years ago.

The 51-year-old was airlifted by the helicopter charity from the scene to the major trauma centre at the Royal Stoke University Hospital.

Upon arriving at hospital, the seriousness of the cyclist’s injuries was soon realised.

After a lengthy road to recovery, Mark has been left Quadriplegic, but despite his disability, it has not dampened his spark to say thank you to the air ambulance crew who saved his life.

“When I had my accident, they airlifted me to hospital and so there’s an element of wanting to pay them back.

Before my accident I was very outdoorsy and into exercise. I was training for the Tour de France and had been for some nine months.

I was cycling my last big route when I was badly injured.”

Relying on the help of his carer Darek Kowalewski, the pair have planned a half marathon from Penrhyn Bay to Rhyl Seafront in aid of the helicopter charity this September.

“It’s been very difficult; I’m trying to get my adrenaline rush through other ways but in a way, it’s nice as Darek is helping me and I can give him the best routes to take.

We have decided that the event which is North Wales’ answer to the Vale – Anturio Coast Running Festival will take place on Saturday, September 14th.”

The route will see Darek start at St Trillo Chapel in Holywell, before heading along the picturesque North Wales coast to the finishing line at the Rhyl Eisteddfod Circle.”

I reckon the route is about 20.5 km, but there is a circular path around the stones, so we’ll just have to do enough laps to make it up to the 21.1 km.

The plan is to have other carers and friends to join in and run a few kilometers along the route with Darek.

I hope to do a few laps around the stones at the end with him also.”

Whilst Darek tackles the challenge in North Wales, 232 miles South, Mark’s niece Beth will tackle the same distance on a climbing wall at the Castle Climbing Centre, London.

The two challenges will run alongside each other and total the same distance as a half-marathon.

“We would like to wish Mark, Darek and Beth all the very best with their upcoming challenges.

Mark is a true inspiration to us all and we are incredibly grateful for his support.

Despite his disability Mark is showing that anything is possible when you put your mind to it.”

Find out more and donate to Mark & Darek’s challenge here