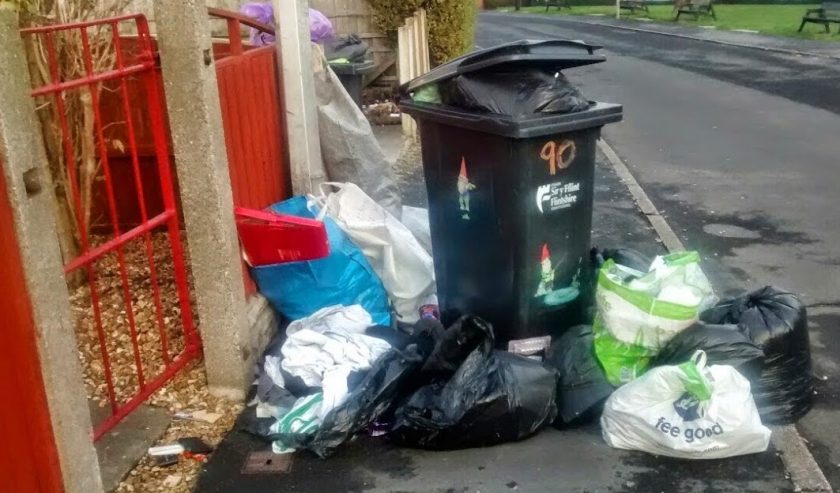 Flintshire County Council has said it is to start fining residents who continually leave extra black bin bags out for collection along with their normal waste bin.

Side waste enforcement is set to begin from March 1 when council officers will be out visiting residents who leave out extra side waste with their black bin “to encourage them to recycle and advise on what can and cannot be recycled.”

People who ‘ignore’ council advice and continue to leave bin bags out alongside their normal black bins will be subject to £75 fixed penalty notices (FPN).

Deeside.com has asked Mrs Thomas to confirm outsourced enforcers Kingdom Security, the controversial firm responsible for enforcing Flintshire’s new dog and litter Public Space Protection Orders will not be used to hand out side bin waste FPN’s in response to a tweet to us by the cabinet member.

You have presumed Kingdom will be leading on this, the Council will be using it’s own enforcement officers to tackle worst areas first. Education and warnings first, fines for those who ignore.

“Many residents are really committed to recycling their waste but there are some who still do not and this severely impacts on our recycling performance.

From 1 March 2018, we will be starting to visit residents who leave out extra side waste with their black bin to encourage them to recycle and to advise them what can and cannot be recycled. If our help and advice is ignored and people continue to leave side waste, a £75 fine could be issued.”

The council has also said it’s new garden waste service will begin on April 1, residents who sign up for the service will be charged £30 per year charge for the collection of garden waste between March 1 to November 30 each year.

Plans to introduce the charge for brown bin collections were passed by the council’s cabinet committee in December.

Officials said the move will raise nearly £830,000 a year through income generation while saving £130,000 due to a reduction in the number of vehicles and operators required for garden waste collections.

The controversial move caused uproar on social media and one group of councillors called for the decision to be looked at again.

Following a lengthy and heated debate the plans to introduce new charges were upheld.

“These matters have been debated at length and neither has been an easy decision, tough choices have had to be made due to the continued UK Government’s regime of austerity. The Council is not legally obliged to collect garden waste and many other Councils have already introduced such a charge.

We do however need to meet strict Government targets on recycling household waste to avoid getting fined – money which we think is much better spent on providing necessary, statutory services such as our children’s education and social health care to the elderly and vulnerable residents of Flintshire. Advice on what to recycle is readily available on the Council’s website or by visiting one of our Connects centres.”

Registration details for the new garden waste service can now be found of the council’s website – www.flintshire.gov.uk/gardenwaste those who choose not to take up the new service can take garden waste free of charge to the counties Household Recycling Centres.