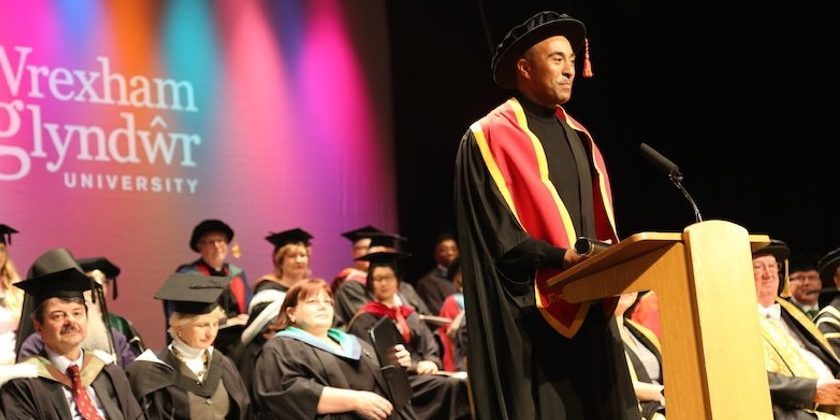 The former 110m-hurdles world champion and world record holder Colin, was given an Honorary Fellowship for his services to sport by the university in 2016.

He was born in Cardiff and is one of the finest and most loved athletes Great Britain has ever produced, winning numerous records and multiple world titles. After retiring from athletics, Colin has seamlessly made the transition into broadcasting, most notably as an integral part of BBC Athletics.

Speaking about the role, Colin said: “It is an honour and a thrill to take up the position of Chancellor at Wrexham Glyndŵr University. The university excels in a lot of things that I believe in, such as social inclusion, and I look forward to being hands-on in this new role.”

The Chancellor role is an ambassadorial one, which will see Colin preside over graduation ceremonies and other on-campus events.

“He joins us at a very exciting time as we progress with our Campus 2025 programme to improve our campuses and facilities, which includes our partnership with Football Association of Wales to build the new National Football Development Centre at our Colliers Park site in Wrexham.

“Colin will be an inspiring role model for our students and graduates, whatever subject area they are in. We will also involve him in our community-supporting initiatives, and are hoping to bring him to North Wales regularly.”