Chester to get new 1,269-home estate close to the Flintshire border

A new 1,269-home estate will be built in Chester after councillors gave two major developers the green light to build it.

Redrow and Taylor Wimpey were given the go-ahead for the new development off Wrexham Road at Tuesday’s Cheshire West and Chester Council planning committee meeting.

The development will include a mix of apartments and houses from one to five bedrooms, as well as a supermarket, shops, a pub, a nursery and a primary school.

However, Cllr Razia Daniels, Conservative member for Handbridge Park, suggested the scheme was ‘incomplete’ as it lacked bungalows and a community centre.

“I feel so many questions remain unanswered,” she said.

“I believe there is no proper infrastructure in place to accommodate almost 1,300 homes.

“I am really disappointed that the developers did not listen to what our residents were asking for – in particular the requests for bungalows and a community centre.”

Members were urged to reject the scheme by both the Hough Green and Westminster Park residents associations over fears they would add more congestion to the already-busy Wrexham Road.

Cllr Neil Sullivan, Conservative member for Handbridge Park, added that the development would increase traffic at the ‘bottleneck of Chester’ at Grosvenor Bridge.

CWAC officers admitted the new homes are expected to add 3.5 minutes to journeys heading into town during peak times, and critics to the scheme called for work to begin on Chester’s Western Relief Road before the homes are built.

Cllr Alex Black, Labour, insisted there is little that can be done to cut congestion while people still rely on their cars.

He said: “I believe that people will keep using their cars until they actually can’t get off the drive because the road is blocked, and then we will be forced to do something about it.

“I sometimes despair of the way we use our cars in this country, and I am one of the worst offenders. I came here by car today and I am going home by car tonight.”

The Wrexham Road site had been greenbelt land, but it was ringfenced for housing in CWAC’s local plan, which was adopted in 2015. 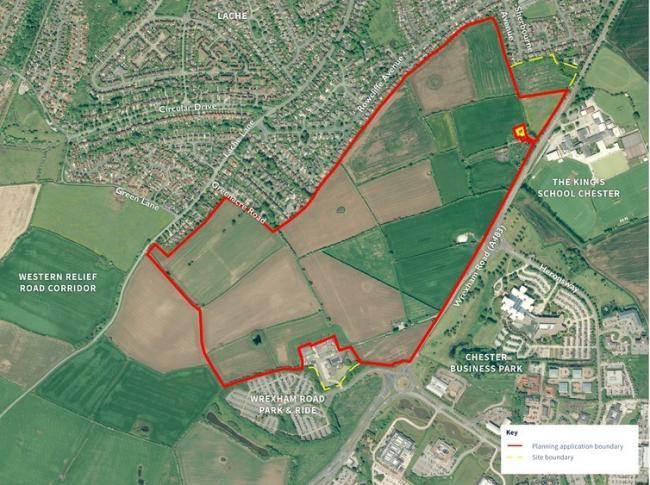 Tony Rimmer, an agricultural chartered surveyor, warned the committee that the development would mean building on porous land which is currently good for drainage from neighbouring farms – and his comments were echoed in the debate by Cllr Norman Wright, Conservative.

He said: “One of the biggest complaints we receive is from Cestrians – that they have got nowhere to live, they have to go out of town or to other parts of the country, that there are no houses for them.

“Here is a big idea being put forward so that local people can live here.”

Members approved the development by nine votes to one, while plans for a new great crested newt habitat to mitigate the loss of an existing one at the Wrexham Road site were unanimously approved.