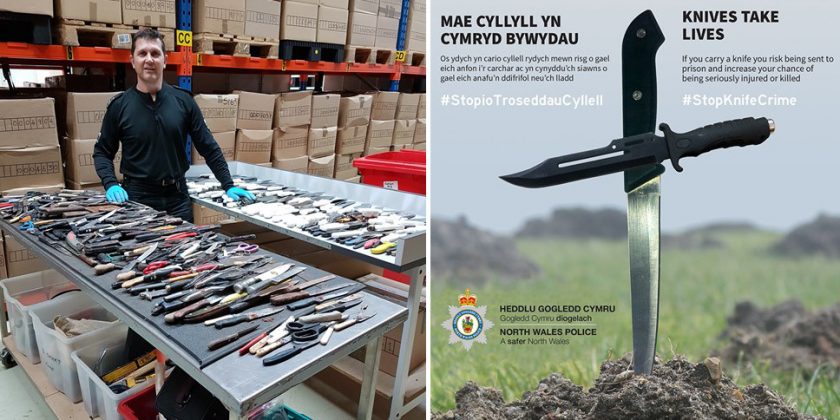 North Wales Police say a week-long knife surrender campaign led to 428 items being handed into police stations across the region.

A campaign ran between Monday 23rd October and Sunday 29th October during which time people took their unwanted knives to special amnesty disposal bins at police stations in North Wales including Mold and Wrexham.

Sergeant Tecwyn Green, a co-ordinator of the operation at North Wales Police said,

“We have collected 428 knives across North Wales over the course of the one week amnesty which is a fantastic result. This is more than what was collected in our previous amnesty, held in July 2017, where 380 items were handed in.

“I would like to thank the public for handing in their unwanted knives, Trading Standards who accompanied North Wales Police to shops selling knives, and also to Denbighshire and Conwy Councils for placing knife amnesty bins at their recycling centres to help with the collection.

“This concerted effort demonstrates our continued commitment to ensuring North Wales remains a safe and welcoming place to live, work and visit.”

Polcie also say the campaign may be over however people can still hand in their unwanted knives at Wrexham, Mold, Rhyl, Llandudno, Colwyn Bay, Caernarfon, Bangor and Holyhead Police Stations.

If anyone has any concerns regarding knives in the community they should contact North Wales Police on 101.

Always dial 999 in an emergency.