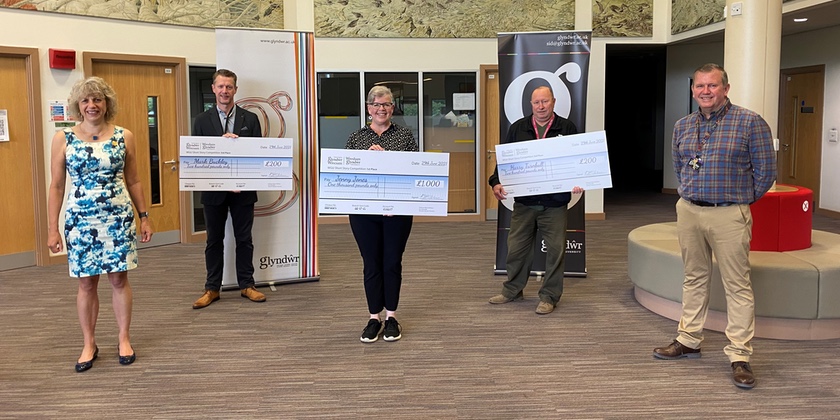 The winners of a university competition which challenged students to create a story inspired by the Covid-19 pandemic have been announced.

Wrexam Glyndwr Students were asked to look at the adversity, resilience, sadness, and hope that has been felt throughout the pandemic and create a short story based on the theme of ‘Lockdown.’

Vice Chancellor Professor Maria Hinfelaar and Associate Dean Colin Heron presented the winner and three runner ups with their cash prizes, which were gifted by a generous local donor.

Associate Dean Colin Heron, who was delighted with the amount of interest in the competition, said, ‘As this was the first time we had run a short story competition we could not predict its popularity.

“We received a total of 42 entries, all exceedingly high quality. The prize winners had a lot of competition, but the judging panel were in complete agreement regarding the result.’

An external judging panel read through the entries and ranked them to produce the four winners.

Jenny Jones who is currently undertaking an MA in Education won first place for her story ‘#essential’ and the top prize of £1,000.

Jenny, who has seen a number of colleagues and friends lose elderly relatives throughout the pandemic found inspiration for her story through their experiences.

She said: “Everyone has a story to tell, I wanted to centre the story on how the elderly might feel about the Covid situation and how their relatives feel about supporting them through it.”

In second place was Dyfan Morris, a postgraduate student in Education, who took home £600 for his story titled ‘The Dog Whistle’.

The third place title and £200 was awarded to two students, Mark Buckley for his story ‘The Transition’ and Harry Turnbull for his story ‘Dust to Rust’ which was closely based on his experience travelling to his home town for his parent’s funerals.

After presenting the winning authors with their prizes Vice Chancellor Professor Maria Hinfelaar said, “I would like to congratulate the winners of this year’s story-writing competition at the University.

“I have read their stories and found them truly inspiring. I would also like to thank our benefactor for his generous support.”