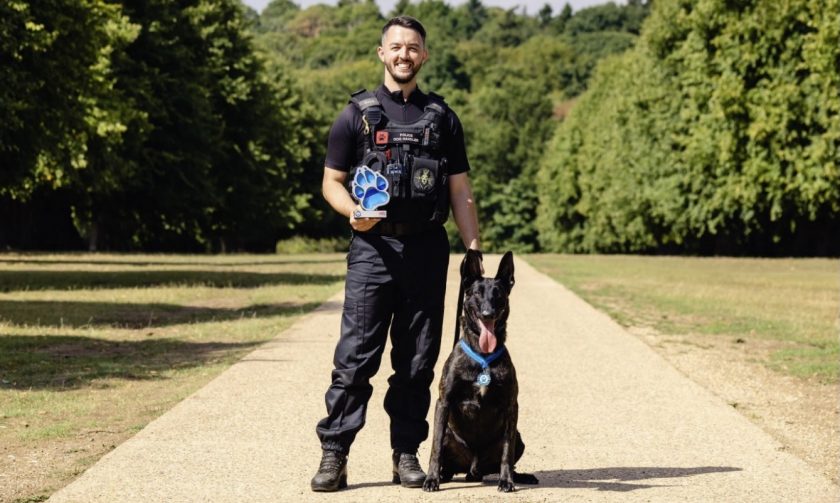 A ‘formidable crimefighting duo’ with just two-and-a-half-years of service under their belt have won a national award for their outstanding operational achievements and commitment to the job.

The duo – who are part of the joint Cheshire & North Wales Police Dog Unit – were honoured at the glittering awards ceremony, hosted by the Thin Blue Paw Foundation at Knebworth Park, in Hertfordshire.

PC McDonough, 31 – who has been a Cheshire Police officer for 11 years, working in the joint dog unit since 2016 – said: “I’d always wanted to be a dog handler and Toro is my second general purpose dog. He came from a security dog trainer and joined the police dog training course with us in January 2020 at 11-months-old. He was flying through the course so we ended up completing it a few weeks early, just before lockdown hit!”

The duo licensed in March 2020 and, in 2021, also qualified for firearms support jobs.

PC McDonough added: “Toro is a very determined, high-drive dog. He’s a natural police dog who doesn’t give up easily and, once he picks up a track, he’s like a freight train; there’s no stopping him. Tracking really is his forte. He really is the brains of the operation, I just hold on for the ride and try to keep up.

“He’s got a very good work mentality and he isn’t phased by anything. But once we get home he transforms into a family dog and a goofy idiot! He’s really chilled out and becomes very playful and giddy. He’s got a great on/off switch. But as soon as he’s in that van, he goes straight into work mode.”

PC McDonough always knew he had a good police dog by his side but realise PD Toro was something special when the duo were searching a busy housing estate in 2020 for a man who was wanted for a string of serious domestic violence incidents.

“Toro was on a long line and had cleared a driveway when we went down the side of the house to continue searching. It was like he’d suddenly been caught by a fish hook, froze, and double-back, latching onto a scent. He went back to the drive and around the side of a caravan barking; I thought he’d found a cat but there, lying underneath the caravan, was the suspect,” PC McDonough said.

“He really showed something special that day. He refused to give up, managed to pick up such a faint scent and went back to check an area we’d already cleared instead of moving on.”

Recalling another incident in 2021, PC McDonough said: “We had a priority target who was wanted on recall to prison for burglaries. He’d stolen a car while he was drunk until he crashed and made off. We’d blue-lighted to the scene but it had taken us about 45 minutes so I wasn’t sure we’d be able to find a scent as it had been a long time.

“He tracked through a housing estate, along alleyways and into a clearing where he caught a scent in the hedgerow. The suspect decided to make a run for it and Toro went straight in, grabbed him and dragged him out by his Crown Jewels! The body cam footage made it onto TV and Toro got a bit of a reputation! Everyone would say: ‘Don’t mess with Toro!’”

Nominating PD Toro and PC McDonough, Chief Inspector Simon Newell – head of Alliance Policing – said: “Their partnership has gone from strength-to-strength and they are now a formidable crimefighting duo with an incredible ‘wrap sheet’.”

CI Newell added: “The road to becoming a dog handler and getting your own crime-fighting canine is an arduous one which takes dedication and skill. I’m very proud of our team of dog handlers and their dogs here at the Alliance. Seeing their courageous endeavours 24/7 is amazing, and I’m always blown away by what these officers and their canines achieve.

“PC McDonough and Toro have done us proud, and their exploits highlight just what the rest of the team are doing to keep residents in Cheshire and North Wales safe – often in difficult and sometimes dangerous circumstances. This award recognises PC McDonough’s handling abilities and tenacious Toro’s fantastic loyalty – they really are a revered crime-fighting team.”

Thin Blue Paw Foundation trustee Kieran Stanbridge said: “PD Toro is still only a few years into his career and has already showed an incredible natural aptitude for the role, as well as complete commitment to getting the job – whatever that is – done.

“Toro and Chris’s achievements over the last few years are very impressive and it’s clear that this partnership has the upmost respect of their colleagues and bosses at Cheshire & North Wales Police. They have demonstrated time and time again how they’re a top crimefighting duo and the public is certainly safer thanks to having them patrolling the streets.”