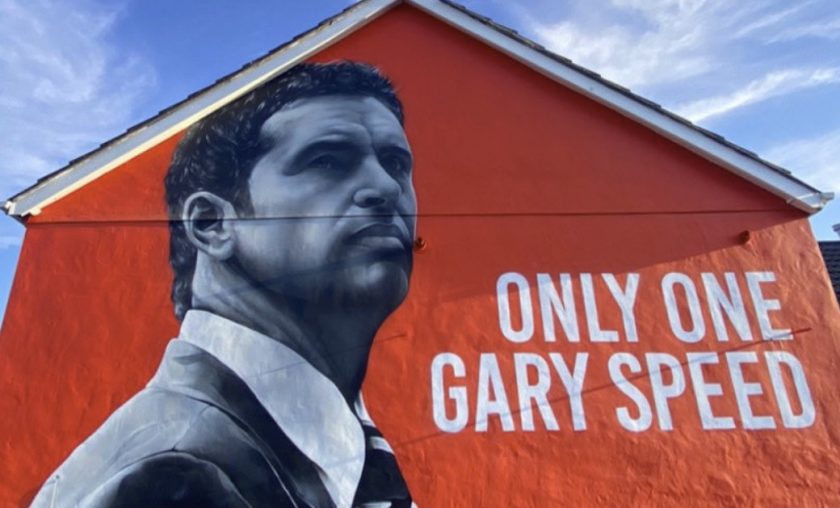 The finishing touches have been made to a stunning mural of Deeside footballing legend Gary Speed.

The tribute has been painted on the side of a building close to the Cardiff City Stadium.

It was made by Cardiff-based Unify Creative in collaboration with the Football Association of Wales (FAW).

“We felt there was not really a lasting tribute to the manager who was instrumental in what we are seeing with the Wales football team today,” he said.

“We had hoped to have it ready before the Ukraine game but it is quite a complex undertaking, so it took a bit longer.

“But he hopes it will be a lasting legacy for his family and his fans in his memory and also as a tribute to the Welsh team.”

He added: “We wanted it to be close to the stadium so fans will walk past it on their way to games and remember.”

FAW Chief Executive Noel Mooney said in a Tweet: “I will pass this morning on way to the @FAWales and be reminded of what @Cymru means …. Gary dared to dream.”

I will pass this morning on way to the @FAWales and be reminded of what @Cymru means – our history, our struggles, our rise, our success, our need to strive for better 🏴󠁧󠁢󠁷󠁬󠁳󠁿 64 years is a long time. Gary dared to dream 🌍🏆#TogetherStronger pic.twitter.com/GYmBDStVBS

It’s been a decade since Gary’s tragic death.

As a youngster he played for Aston Park Rangers, Flintshire schoolboys and attended Hawarden High School.

A talented midfielder who played almost 950 games for club and country, Speed represented Wales with an unwavering passion and pride during his 85 appearances with the dragon on his chest.

Like many great Wales players of his era, Speed never made it to the finals of a major tournament. But he did much more.

His legacy will forever live in the achievement of reaching consecutive EURO finals in 2016 and 2020 and now qualification for the 2022 World Cup finals in Qatar.

Speed didn’t live to see Wales compete on the biggest stage, but the professional culture and environment that he developed during his time as manager has shaped the foundations for those who succeeded him.

Page is the third man to coach Wales since Gary Speed’s untimely death in 2011 at the age of just 41.

During the post match press conference, Page said: “Gary Speed started this 12,13 years ago, I want to dedicate this [win] to Gary as well.”

“He started the culture 12 years ago and there was a difference, there was a change in the environment, it completely changed.”

“I’ve inherited that, where we’re just confident going into games we don’t hope to qualify for the Euro’s or the World Cup, we believe we can do it.”

“So there’s been a massive change in the mentality as well.”

While Speed’s his work with Wales at the time of his death was distorted through emotion, it is clear now that the foundations he put in place were solid and effective enough for his successors to thrive upon. Now a decade on, his legacy continues to spread.

His vision created a set of ‘Welsh Way’ principles that are now fully integrated into the FAW National Syllabus and run throughout the domestic game and Wales’ men’s and women’s national teams.

They undoubtedly contributed to Wales success at Euro 2016, 2020 and World Cup qualification and will continue to do so for generations to come.

Deeside’s Gary Speed will be forever missed, but he will also be forever loved and forever celebrated by those who continue to share his Wales passion.