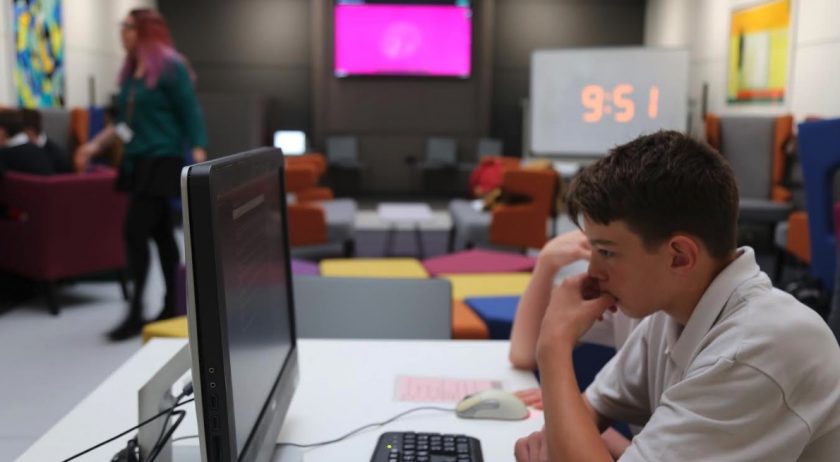 Games developed by Wrexham Glyndwr University students – alongside officers from a specialist task force – have been used to educate young people about cybercrime.

The students were put in touch with Detective Constable William Farrell from the North West Regional Organised Crime Unit – which covers both North Wales and the North West of England – by their lecturer Nathan Roberts.

Nathan said: “I met William while promoting the University and our involvement with Serious Games technology by showcasing a previous project at the Welsh Rally.

“We were both keen to work together with Glyndwr’s students on a real-world project. One of the issues Will had was trying to educate and support young people in different areas of Wales around cyber security, and due to the rural nature of the country this had proved difficult.

“I suggested that we could help in two ways, firstly by engaging our students in a real-world problem trying to resolve the problems of educating individuals around cyber-security, and secondly, by holding a showcase event that brought different schools and colleges to a central location – helping the police to concentrate resources as well the university to demonstrate anything we develop.

“With that in mind, we brought everything together on Glyndwr’s Plas Coch campus – and this led to the creation of the university’s first CyberTech event this year”.

In the run-up to the event, as part of a dedicated module on serious games and immersive technology, students worked alongside police officers to design a computer game which would appeal to twelve to fourteen year olds. The games were designed as officers wanted to get teenagers’ attention about cybercrime issues in a fun and engaging way.

The module was arranged by Nathan into stages which took participating teams from concept to development, with a team of officers checking in regularly as the games progressed to ensure content was suitable.

Nathan added; “The games were developed through a Dragon’s Den style pitching session – students presented their concept ideas to a panel and audience, with ideas voted on by everyone and our clients in the police having the deciding vote.

“Due to the scale of the task, students worked in groups with 6 groups delivering content – with the best of their games set to be showcased to the public during the CyberTech event. On the day, games were unveiled to hundreds of pupils from schools and colleges across North Wales – the teams’ target audience.

“Every team which took part produced a great game – and two in particular stood out. Those teams were recognised for their outstanding contribution and their games will be used by the police in awareness-raising campaigns.”

The two teams whose games were picked were Titanic Games, whose game Data Defence required players to defend different systems against various types of cyber-attacks by deploying appropriate defence strategies, and Grym Games, whose Hypernet Case was a Virtual Reality Shooter stylised on Tron, where participants travel through an infected system identifying and neutralising different types of cyber-attacks.

Detective Constable Farrell both attended the CyberTech event – where he presented to participants about the work that NWROCU is doing on cybercrime – and later came back to the university to present each team and participant with a certificate in recognition of their work.

He said: “The average age of arrest for a cybercrime is just 17. Young people with excellent computer skills sometimes don’t know that their actions could be illegal. For example, it is an offence under the Computer Misuse Act 1990 for an individual to use a malicious software tool to knock a friend offline from an online computer game (known as a Denial of Service attack). My role is to prevent individuals from committing such offences and education is key.

“Research shows a common pathway into cybercrime is through online computer gaming.  We provide focused education to help individuals make informed choices and help them understand the consequences of their actions.

“The challenge is to deliver computer law and ethics awareness to young people in a creative, fun and engaging way. Working with partners including Wrexham Glyndwr University is an important part of achieving this goal.

“It has been a pleasure teaming up with Nathan to deliver the successful CyberTech Event – we received really positive feedback from attending schools. The students on the Serious Games Project are a credit to the University.

“They successfully delivered to my brief of incorporating our key cybercrime prevent messages into their game themes.  I look forward to seeing young people from across North Wales and beyond playing the games and learning how to stay on the right side of the law.”