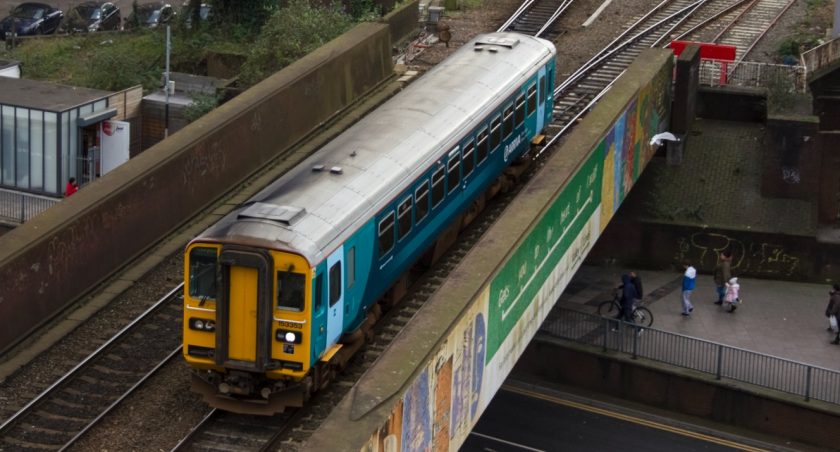 The introduction of a new generation of train, which was set to come into service on the Wrexham to Bidston line in December, has been delayed Transport for Wales (TfW) confirmed to Deeside.com.

The train operator – which has been ‘celebrating’ the first-year anniversary of taking responsibility for rail services across Wales and the Borders this week – will, instead replace the current trains operating on the Wrexham, Bidston line with Class 153 trains – or ‘Scuds’ as they are affectionately known.

Trains currently operating on the line – Class 150 trains – are being redeployed to South Wales in a bid to boost capacity, the change will take place when the new December timetable kicks in.

The move which has been labelled a “significant retrograde step” by influential passenger group, the Wrexham Bidston Rail User Association (WBRUA).

TfW has five Class 230 D-Trains (pictured below) on order from Stratford upon-Avon based Vivarail.

The new D- Trains – which use the bogies and aluminium body shells of withdrawn London Underground trains – were expected to be operational by mid 2019 but one rail insider told Deeside.com there had been a significant delay.

The initial delay was confirmed last month, TfW said the trains would be coming into service in December.

Deeside.com has now been told the D-Trains wont come into service until next year as TfW wants to make sure they are “fully reliable when they enter service.”

Last winter there was widespread disruption to services due to a high number of trains needing repair at the same time, the Class 150’s were the worst affected units accross the TFW fleet.

Many suffered wheel damage from sliding on the rails which meant a large proportion of the fleet needed repairing at the same time.

This caused widespread distribution on the Wrexham to Bidston line with services cancelled for days at a time.

At the beginning of October TfW said it had sourced a number of Class 153’s (scuds) from rail leasing company Porterbrook, the supplier of the delayed Class 769’s, these are due to come into service on the Rhymney Line.

What TfW failed to say was the Class 153 trains are unable to operate across much of the Valley Lines network which includes the Rhymney Line.

This news alerted WBRUA who challenged TfW over the move and the revelation that the 153’s were to be deployed on the Wrexham to Bidston line came to light.

According to the WBRUA the Class 153 single leaf doors makes them “not suited to the nature of the [Wrexham, Bidston] route and its tight timetable.”

A WBRUA spokesman said: “We are extremely concerned that TfW are intending to use class 153s instead of 150s on the Wrexham-Bidston line from December and is extremely disappointed that it heard about the change from rumours rather than consultation.

“The proposed replacement of the current Class 150s with Class 153s in multiple from December on the Wrexham-Bidston line represents a significant retrograde step.

“Station dwell times will also increase due to the single leaf doors so the current timetable will be extremely challenging for them to operate.

“We have sought political support to oppose the introduction of these trains.”

The Class 153 trains were designed to operate as single carriage units on rural and branch lines, TfW will couple two trains together for its service on the Wrexham to Bidston line, this however will make the trains around 10 tonnes heavier than the current units.

This, in turn could create another unique issue on the line, when there is snow, ice and heavy leaf fall on the tracks, trains struggle to negotiate the uphill gradient the lies between Shotton and Hawarden stations.

The added weight of the Class 153’s has the potential to increase the number of cancellations on the line forcing passengers onto buses doubling journey times in many cases.

A Transport for Wales spokesperson said: “We’re currently investing £40 million on refurbishment of our existing fleet, alongside acquiring additional trains so that we can increase capacity for all our customers throughout the Wales and Borders network.

In our December timetable change we will be introducing Class 153 trains. These will run in pairs on the Wrexham-Bidston route, providing more seats for our customers than current trains.

The Class 153s are currently being refurbished and will provide a much improved customer experience including a reconditioned interior and accessible toilet facilities.

The Class 230 trains will be introduced in 2020 on the Wrexham-Bidston Line.

The reason for the slight delay is to ensure that these trains are fully reliable when they enter service. Our drivers are currently receiving ongoing training on these trains at Vivarail’s base at Long Marston.

The customer experience is at the heart of our decisions and we want to ensure any additions to our fleet are fully reliable before introduction.”

We asked TfW why the Class 153 units were not being deployed in South Wales:

TfW said, “The Class 153s can operate over most of the Wales and Borders network, but are unable to operate across much of the Valley Lines network.

We are redeploying our Pacer trains [Note, Pacers do not operate on the Wrexham, Bidston line – TfW are referring to the Class 150’s] on a temporary basis on Rhymney Line services that will be operated by the delayed Class 769s when they enter service in the new year.”

Transport for Wales sent some pictures showing the inside of a refurbished Class 153 train.


Tweets by Deesidedotcom
Wednesday May 25th 16:55