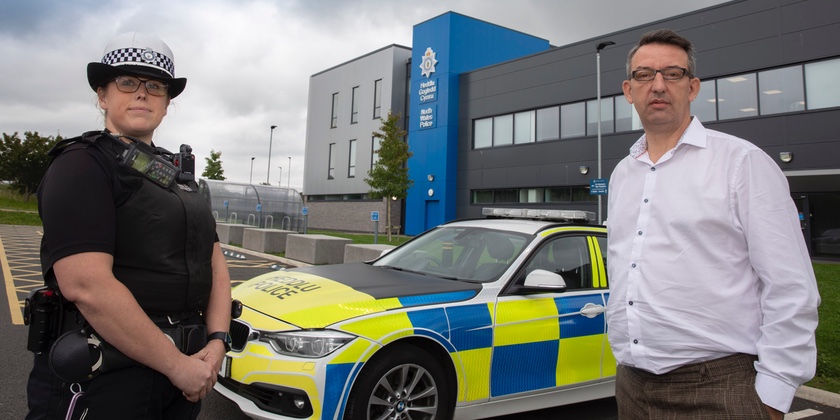 The head of a crack intercept team aimed at tackling County Lines operations by cross-border criminals has warned that they “can run, but can’t hide.”

Chief Inspector Jon Aspinall made the vow to the region’s new police and crime commissioner, Andy Dunbobbin, when he paid a visit to briefed on their successes.

The specialist unit, which was established last year with extra funding from the Office of the Police and Crime Commissioner, comprises two sergeants and 14 constables.

The team use Automatic Number Plate Technology (ANPR), an array of other technology and intelligence to clamp down on the organised crime and drugs gangs who mainly come from the North West.

They work closely with neighbouring forces including Merseyside and Cheshire to target the cross border criminals – and it works.

Since becoming operational the Intercept team have recovered more than £1.8 million of drugs, hundreds of thousands of pounds in cash, mobile phones, weapons including knives and even a Taser.

As a result, the Intercept team have made more than 230 arrests involving nearly 500 offences.

Mr Dunbobbin said: “The Intercept team have been incredibly successful and they are making a massive difference in keeping our communities safe.

“The people they target are the ones who are the most dangerous or whose activities cause the most harm.

“The Intercept officers potentially put their lives on the line every time they go on duty and I am grateful to them for the fantastic job that they do.

“They are an absolute credit to North Wales Police and to the policing profession in general.”

Chief Inspector John Aspinall is also proud of their contribution.

He said: “The Intercept team deal with the biggest risk, threat and harm issues affecting North Wales on a particular day so if there is an individual wanted for robbery, murder or domestic violence it’s deemed as high risk, they will go out and make sure they are brought into custody.

“It could be that they are looking for a high risk missing person. Whatever the highest risk is on that day, they have the ability to deal with that.

“On top of that they will deal with our more high-end criminals, the organised crime gangs and they do a lot of work around County Lines drug running.

“They will target travelling criminals coming in and out of North Wales along the likes of the A55.

“One thing that is really important is the relationship we have with the Merseyside and Cheshire forces with whom we work very closely.

“They will contact us when they have people leaving their force area and are heading in our direction. We want the criminals to know we are working together and that relationship has helped us get some high-end results.

“A lot of what we do is intelligence driven – we know a lot about what the bad guys are doing. We do a lot of research using the capabilities we have from an IT perspective. It’s also important that members of the community tell us what’s going on.

“The message we want to send out is that if you’re involved in any level of criminality, from burglary through to County Lines drug dealing, is that you can run but you can’t hide.”

Acting Sergeant Emma Birrell, a fourth generation police officer, is one of the original members of the team and loves her job.

She said: “Everything that we do on Intercept really is intelligence-led policing, building a bigger picture which comes from a multitude of sources, so we know who’s in the car, where it’s going, where it’s been, all that sort of thing to make sure that we’re also dealing with it at the right time