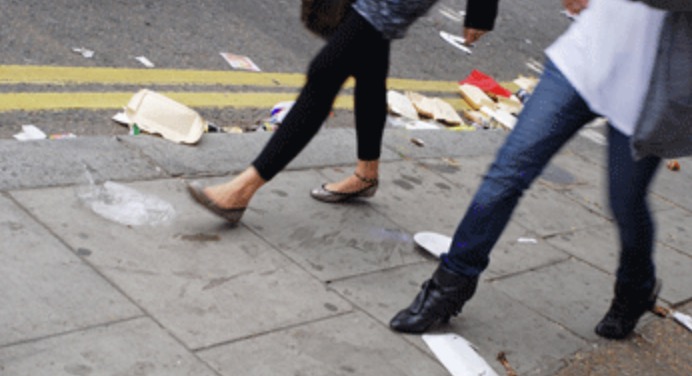 Flintshire County Council’s private litter police are handing out fines totalling around £22,200 a month figures released in a Freedom of Information request show.

In the five months to March 31st this year – 1480 people have been caught by enforcement officers from private firm Kingdom Security dropping rubbish or not cleaning up after their dogs.

During the five-month period which Deeside.com requested information for – a total of £111,000 in fines were dished out by the controversial private firm in Flintshire – over 90% of the fines have been for dropping cigarette ends.

The figures also include fixed penalty notices handed out since new Public Space Protection Order’s (PSPO’s) came into force at the end of October.

The PSPO’s ban dogs from entering marked sports pitches, fining owners who break the rules, fixed penalty notices are also given out if they fail to pick up after their dogs or don’t have means to pick up and bag dog mess.

The new dog-related rules have offered Kingdom enforcement officers an even greater opportunity to bump up the number of fines they hand out, who, according to a BBC Panorama program – can earn ‘competency allowances’ or bonuses on fines given out.

Up to the end of March just six fines totalling £450 have been dished out to those breaking the new PSPO rules.

Figures also show that between 2016 and 2017 there’s been a 4300% increase in fines handed to smokers who were caught not disposing of cigarette ends in dedicated bins or by other ‘legal’ means.

The previous year the council’s own staff carrying out enforcement duties handed out just 86 fines for smoking-related litter offences.

Based on the latest population data on smoking, that works out at around 12% of smokers in Flintshire receiving a fine from Kingdom.

Once fines are collected they are divvied out 85% for Kingdom, 15% to the council who says money is used from the lucrative income stream to fund additional enforcement activity such as targeting dog fouling hot spots.

The council says Kingdom’s service is ‘cost neutral’ as long as the number of fines remain at the levels they are currently.

‘Outsourcing enforcement duties may reduce costs although this may not be sustainable as FPN numbers fall.’ A council document states.

Initially brought in on a 12 month trial in Flintshire, Kingdom has had a 6-month extension to its contract.

The outsourcing of environmental enforcement has ‘had a beneficial impact on the cleanliness of our town centres and open spaces demonstrated by our improved performance measured through national audits undertaken by Keep Wales Tidy,’ according to Steve Jones, the council’s chief officer for Streetscene and transportation.