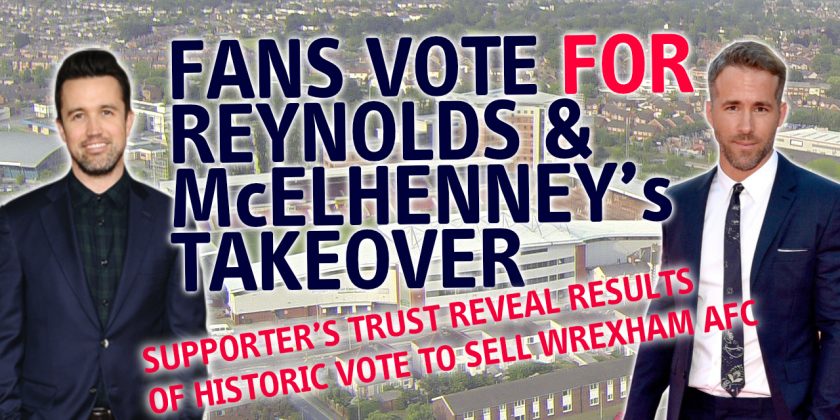 The pair addressed fans a week ago and outlined their vision for the club, and have had the resounding backing from the majority of fans.

Two Special General Meetings of fan owner group Wrexham Supporters Trust have been held, the first with a 97.5% agreement that negotiations should be entered into, and the second to ‘irrevocably and unconditionally approve’ the deal put forward.

A message from our owners-elect…

The full statement is below from the club:

The Wrexham Supporters Trust Board would like to thank all members who took the time to vote and take part in the process relating to the Extraordinary Ballot. There was a significant turnout for the ballot at 91.5%.

We are now in a position to confirm the result of the vote, which has been independently verified by Mi-Voice, the company assisting the Trust in the process. As can be seen in full detail below, members have voted FOR all three resolutions.

As such – subject to final agreement, league and FA confirmation – the RR McReynolds Company, LLC will take 100% control of Wrexham Football Club Limited from the WST.

Both parties will now proceed with finalising the details of the takeover, and we will update Wrexham supporters as soon as we can.

The Wrexham Supporters Trust Board would like to thank Mr Rob McElhenney and Mr Ryan Reynolds, and their advisors Inner Circle Sports and Walker Morris, for their professional and considered approach and for the time they have already put into the process.

As Wrexham supporters, we would like to wish them the very best of luck in charge of our Football Club and look forward to what the future brings.

We would also like to thank our advisors, Sheridans, Mackenzie Jones, BDO and Rob Parry, for their assistance throughout the process.

Finally, to WST members, we would like to thank you for all your support since we took control of the Football Club in 2011.

We will update supporters in due course as to the future plans for the Wrexham Supporters Trust.

Llyr Gruffydd, Plaid Cymru’s North Wales MS said, “This is an exciting new chapter in the club’s long history after the WST effectively saved the club from a very dark period of uncertainty.”

Wrexham’s MP Sarah Atherton said “Excellent news for the club & town! It is fantastic to see such a high-profile investment in Wrexham AFC and the excitement that this has generated.”

Council Leader Mark Pritchard said “It’s utopia. Superb. Incredible.” He added, “Its a credit to Spencer & WST Board, a big thank you for what they have done.”

Lesley Griffiths MS says: “The unanimous decision by the supporters to sell was no real surprise and I believe this move will not only be positive for the club, but a boost for the whole town” adding she “cannot wait to see how it unfolds”.