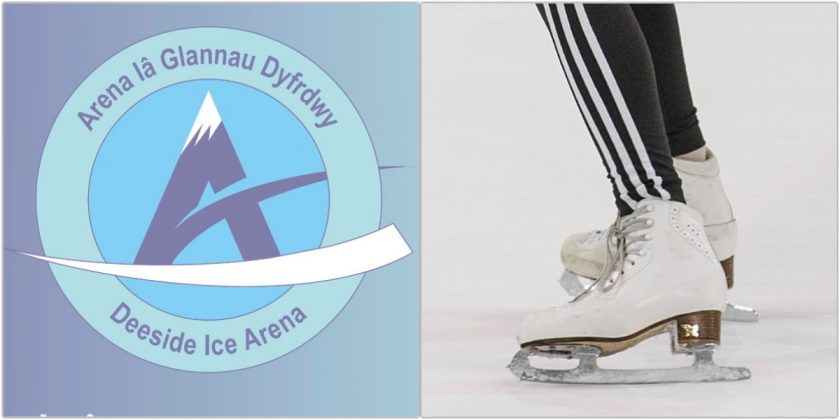 Aura Wales is gearing up to reopen Deeside Ice Rink after being closed for over two and a half years.

Aura – the not-for-profit company that manages most of the leisure centres and libraries in Flintshire shared the new logo for the ‘Deeside Ice Arena’ last week and a dedicated Facebook page is now active.

The ice rink was commandeered by Betsi Cadwaladr University Health Board and converted into a hospital at the start of the pandemic.

The hospital was stood down in March last year but the ice rink continued to be used as a mass vaccination clinic.

The Deeside vaccination centre played a key role in the fight against COVID-19, and was hailed a great success by delivering more than 220,000 COVID-19 vaccine doses.

Following the decommissioning of the vaccination centre, work began to bring the ice rink and arena back up to their original state.

Deeside Ice Rink is one of only two in Wales and is used as a celebrity training venue for ITV’s Dancing on Ice.

Deeside Dragons have been prevented from playing due to the closure of the ice rink.

After confirmation that the rink will be back in place this year, the club was accepted into the National Ice Hockey League’s Division One North.

The Dragon’s last competitive match was a 3-2 win over the fierce rival Widnes Wild in March 2020, the team is now gearing up for their first game of the season away at Sheffield Scimitars on Sunday, October 2.

Aura said it wasn’t able to share a precise re-opening date but a clue lies within the fixture list of the Deeside ice hockey team.

A scan down the list of upcoming Dragons fixture list shows the team are on the road for the whole of October, it also reveals the first home fixture at the Deeside Ice Arena will be played on November 13 against Solway Sharks.

A spokesperson for Aura said: “We are hopeful that the reinstatement works will be successfully completed over the next couple of months and are excited about the ice arena being returned to its original purpose.”

“Whilst we are unable to share a precise re-opening date at the present time, we are very much looking forward to welcoming back our loyal ice skating customers in the near future.”