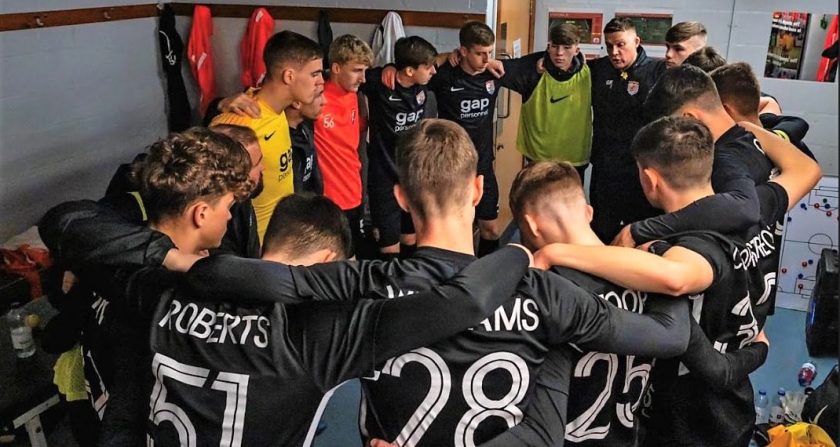 Learners from the college are among the Connah’s Quay Nomads Under 19s squad that led the JD Cymru Premier Development North League before the season was cancelled due to the Coronavirus pandemic.

Following consultation with member clubs, the National Leagues Board decided the 2019/20 season would be curtailed and a ‘points per game’ model would be used for those matches that have not yet been played.

“Under the circumstances football carries very little weight at present, but to get this kind of news during such a period of uncertainty is fantastic,” said Gareth.

“This is a special group of players and coaches, and the support we’ve had has been incredible, notably from Coleg Cambria and Tim Williams, who heads-up the academy side of the programme, which has seen more than 70 students graduate and progress to university, employment and scholarships in America.”

“It’s been a massive group effort, and though we didn’t fulfil all of the fixtures we wanted to because of the pandemic, our run of games since Christmas included victories over TNS and Airbus.

“Over the course of the season we were the best team in the division and this is just rewards for the effort put in by all of the boys.”

Director of Football and founder of the scholarship programme Jay Catton added: “The football played and the development of the group has really stepped up this season so full credit to all of the staff and everyone involved.

“The Under 18s are also top of their league so there’s potential they’ll be crowned champions and be in the same position. For now, I congratulate the Under 19s and look forward to year seven of the Nomads Academy and Coleg Cambria scholarship programme from this September.”

Academy players combine training with the Nomads and Cambria with strength and conditioning work, tactical seminars, recovery sessions and a schedule which mirrors that of the first team.

They also represent the college in national and regional tournaments and are given the opportunity to undertake FAW coaching qualifications.

Coleg Cambria’s Director of Curriculum for Sport and Public Services Sally Jones said victory for the Under 19s was well deserved after an incredible start to the season.

“Of course, this is not the way they would have wanted to win the championship, but the hard work and dedication they’ve shown since last summer means they are more than worthy of the title,” she said.

“Our elite teams have performed really well across the academic year and our partnerships with leading clubs – including Connah’s Quay Nomads – go from strength to strength.

“Congratulations to all of the players and everyone involved.”