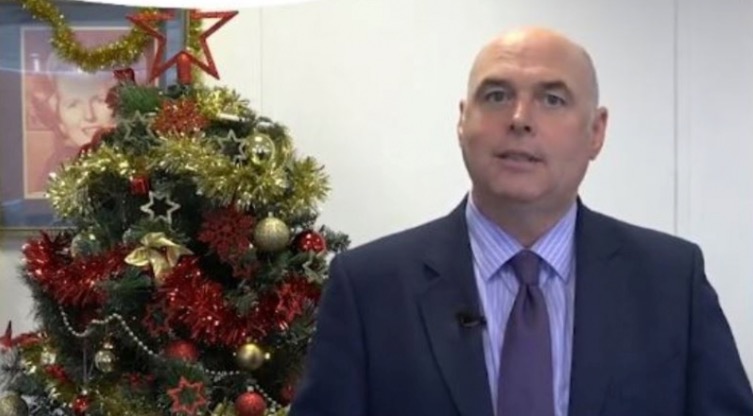 The Leader of the Welsh Conservatives has stepped down with immediate effect in the wake of an investigation into drinking in the Senedd, and Darren Millar MS has stepped down from a front bench role.

Yesterday afternoon the Welsh Conservatives “extended its unanimous support” for Paul Davies MS to continue as Leader, however he has now stepped down.

The investigation into ‘drinking on the Senedd estate’ has made referrals to Cardiff Council after it found ‘a possible breach of regulations occurred’.

The allegation is that consumption of alcohol took place on the premises of the Welsh Parliament on the 8th of December – a significant action and date with the pandemic restrictions on the serving of alcohol coming into effect on the 4th of December. The unofficial ‘meeting’ took place ‘in the Senedd tea room’ in the Ty Hywel building, which is behind and linked to the Senedd building pictured above and contains a range of office space as well as canteen areas, at a time where restaurants and pubs could not.

In a statement just before lunchtime today the Paul Davies MS, the now former leader of the Welsh Conservatives said:

“I am truly sorry for my actions on the 8th and 9th December. They have damaged the trust and respect that I have built up over 14 years in the Welsh Parliament with my colleagues and the wider Conservative Party but more importantly with the people of Wales.”

“Whilst using the Senedd facilities at all times my colleagues and I maintained social distancing. There was no drunk or disorderly behaviour. We did not have to be escorted out of the building as some reports have suggested. What we did was to have some alcohol with a meal we heated up in a microwave, which was a couple of glasses of wine on the Tuesday and a beer on the Wednesday. I broke no actual Covid-19 regulations.”

“For the last 10 months of the pandemic, I have followed the Covid-19 regulations to the letter. As with everyone across Wales, I have not seen family members or friends, I’ve not eaten at my favourite restaurants and, like you, we enjoyed a subdued Christmas compared to other years. I will continue to follow the Welsh Government’s Covid-19 Regulations and I would urge everyone to play their part in defeating this virus so that we can all return to normality.

“I am grateful for the support of colleagues in the Welsh Conservative Party for their support in this difficult time, and especially to my wife Julie and my Senedd colleagues who have offered empathy, trust and advice. They have treated me with the same courtesy and decency I hope I have always extended to others.

“Over the last couple of days, I have been speaking with colleagues in the Senedd and the wider Conservative Party. Whilst they have confirmed they do not wish to see me step down, I believe that my actions are becoming a distraction from holding this failing Welsh Labour-led Government to account, not just on their roll out of the Covid-19 vaccines but from more than 20 years of their dither, delay and failure. Yesterday I indicated to the Conservative group in the Welsh Parliament that I wished to resign, but they urged me to reflect further, and we agreed to meet again on Monday. However, for the sake of my party, my health and my own conscience, I simply cannot continue in post.”

“Therefore, I am stepping down as Leader of the Welsh Conservatives in the Welsh Parliament with immediate effect.

“It is for the group to decide how best to choose a new leader, but I hope that process will be seamless and speedy, and I pledge my support to whoever becomes leader.”

Darren Millar MS has also issued a statement – “This has been a difficult week. I want to apologise to my family, colleagues and constituents for any embarrassment that some of the media stories may have caused in recent days.

“There have been some wildly inaccurate and unfair reports so I want to set out the truth.

“As has been the case in most weeks since September when the Hybrid Senedd was sitting in Cardiff Bay, on both the 8th and 9th December last year I used the self-serve catering arrangements that were made available for Senedd Members. On both evenings I served myself a pre-ordered, pre-prepared meal that was reheated in the microwave and ate it while drinking an alcoholic beverage and discussing work matters with colleagues.

“Social distancing was maintained throughout these working dinners and it simply did not occur to either me, my colleagues or the catering team that the arrangements may have been inappropriate.

“There was a member of catering staff present in the tea room for a short time after my arrival on the 8th December but she did not serve me a drink, nor did I request one. In fact, I encouraged the member of staff to go home and close up the counter as it had been a long day for her. No members of catering staff were present on the 9th December and the counter was closed for the whole evening.

“While I am advised that I did not breach coronavirus regulations I am very sorry for my actions, especially given the impact of the tough restrictions that people and businesses are enduring.

“For this reason, and given that Paul Davies has resigned as Welsh Conservative Group Leader in the Senedd, I have decided to step down from my front bench role in the Welsh Parliament.

“I am cooperating fully with ongoing investigations and will continue to do so.”