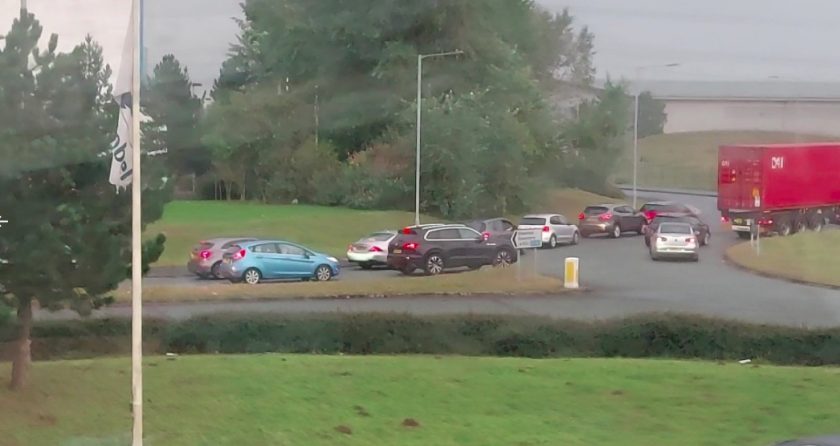 Traffic was at a standstill around Deeside Industrial Estate on Tuesday evening as a huge queue of cars formed on the approach road to the coronavirus drive-through testing centre.

Several people took to social media saying they had waited for up to two hours in a queue and still didn’t get a test.

Absolute chaos trying to get a covid test (not me, I was driving) 2 days online before offered a test 20 miles away at Deeside. Then a two hour queue backing up the whole road for miles. No tests when you got to the front, apparently. We came home. #deeside #NoTests #covidchaos pic.twitter.com/zeWANzrnFj


There has been a surge in demand for tests across the UK amidst a rise in Covid cases but the issue is being blamed on ‘lab capacity.’

Members of the public have to use the online booking system to arrange a coronavirus test to be sent to their home or to make an appointment at a drive- or walk-in centre.

Many say they are being met with a page that says ‘This service is currently very busy’ and ends their attempt to book the test, advising them to try again later.

Others say they they are being offered tests hundreds of miles from their home.

Jason Mansell, who sent the photograph above, alerted us to the problem at around 7.20pm he said: “Both roads coming into (Deeside Industrial Estate) zone 3 from Chester and Flint are blocked.”

Traffic sensors showed tailbacks of around 1.5 miles to the A494 exit slip road.

Still a long queue of traffic leading into Deeside Ind Estate this evening – cars appear to be heading towards the Covid testing centre – a quick search on social media shows people coming from as far as Dudley to get a test. https://t.co/bjSuLU7EVc

Deeside.com understands that the testing centre, located next door to the Toyota engine plant on the industrial estate, is currently processing around 1000 people per day, up from a figure of around 250 in previous weeks.

Matthew Jones tweeted us, he said: “My partner just been in traffic for over an hour waiting for a test. Had a test booked for 19.00 obviously missed it as it’s closed now. Shocking.”

We are also aware that a large number of those travelling to the industrial estate for a test did so without the QR code which is sent via a test confirmation email, without that people won’t be given a test.

Helen told us that “lots of people turned away” this evening as they “didn’t receive the QR code when they booked the test.”

Clare shared a video on twitter of the queue heading into the industrial estate, she said:“8.06pm. 1hr 15 mins into a wait to get tested tonight at Deeside test centre and it was obvious that we weren’t going to get the test and neither would the hundreds of cars in front or behind us! Disaster!!!”

8.06pm 1hr 15 mins into a wait to get tested tonight at Deeside test centre and it was obvious that we weren’t going to get the test and neither would the hundreds of cars in front or behind us! Disaster!!! pic.twitter.com/kSPNFmTcgx

Graham Tromans said his son was travelling up from the West Midlands for a test, he tweeted:

“Great testing system, my son and family can’t be tested at Merryhill (West Midlands) about 2 minutes away from his home has to travel to Deeside in Wales tonight to get tested 2 hours away. Get a grip @GOVUK Ridiculous.”

Great testing system, my son and family can’t be tested at Merryhill about 2 minutes away from his home has to travel to Deeside in Wales tonight to get tested 2 hours away. Get a grip @GOVUK Ridiculous.

In the Commons today, UK government health secretary said: “We have seen a sharp rise in people coming forward for a test, including those who are not eligible.

Throughout this pandemic, we have prioritised testing according to need.

Over the summer when demand was low, we were able to meet all requirements for testing, whether priorities or not, but as demand has risen we are having to prioritise once again.”

“People who are unwell or with poorly children need tests now. When testing breaks down, tracing breaks down and we can’t track growth in the virus.

Infections are rising and ministers are losing control of the virus.”

Mr Hancock said it was inevitable that demand is rising because Covid-19 testing is “free.”

“The good news is that capacity is at record levels and that a record number of people are able to get tests.

I do not deny that it is an enormous challenge. When a service is free, it is inevitable that demand will rise.

The challenge is to make sure that we prioritise the tests that we have as a nation for those who most need them.” He said.

Earlier in the day several people reported the site at Deeside Industrial Estate was empty.

I had to drive from Birmingham to Deeside (Cheshire / Wales border) to get a test for one of our family. 5 hours on the road, when I arrived, I was one of 4 (FOUR!) cars present. There’s a test site in Sutton Coldfield that was pretty much empty… 500m from our front door! pic.twitter.com/9WEU3JaO7E

Hi, tried nearly all of yesterday 2 get appt and no luck! Finally got one at 8pm and had to do just short of 100 mile round trip to Deeside to get a test for husband who has high temp and none stop coughing. Got there an it’s empty, what’s going on?! pic.twitter.com/ZnMhxZPibH