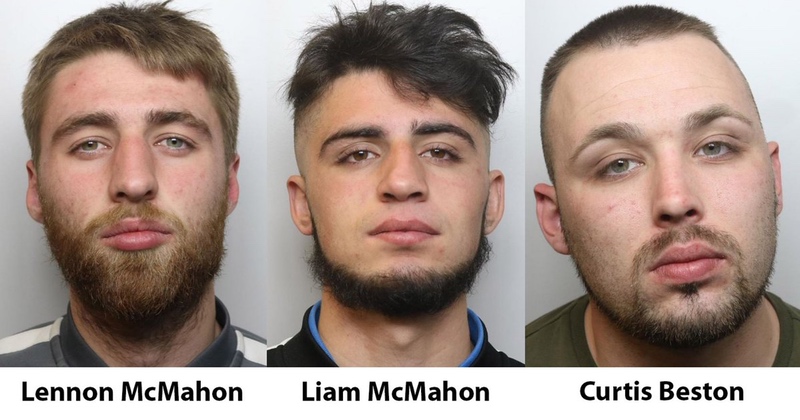 Three men have been jailed following the theft of 17 caravans and five motor vehicles across England and Wales.

Curtis Beston, of The Chantries in Coventry, and brothers Lennon and Liam McMahon, both of Southam Close, all pleaded guilty to a charge of conspiracy to steal from another and were sentenced at Chester Crown Court on Friday 16 August.

Beston, 25, was handed a prison sentence of four-and-a-half years.

Lennon McMahon, 19, and Liam McMahon, 18, were ordered to serve four years and three-and-a-half years respectively at a young offenders’ institute.

The trio were arrested by Cheshire Constabulary officers on Wrexham Road near Whitchurch shortly after 1am on Monday 20 May.

The Ford Transit van they were travelling in was pulled over as it looked like one that had been involved in the theft of caravans.

Police say the van that was subsequently seized had cloned number plates and had been stolen from the Coventry area.

Subsequent analysis of the trio’s mobile phones and Automatic Number Plate Recognition (ANPR) and CCTV footage revealed that they had been involved in a crime spree since Friday 9 April, regularly travelling from their homes in Coventry late at night to break into caravan storage sites in the North West of England and North Wales.

As well as stealing caravans and motor vehicles, they caused criminal damage at many of the sites they targeted.

They also stole items from caravans that they did not tow away from the sites.

The sites the trio targeted were predominantly in Cheshire – in Croughton, Coddington and Capenhurst, which are all near Chester, in Oakmere near Northwich, in Wettenhall near Winsford, in Byley between Middlewich and Northwich and in Warmingham near Crewe.

Between 2pm and 5.20pm on Tuesday 9 April two caravans were stolen and criminal damage was caused at a farm in Croughton.

Further damage was caused and another caravan was stolen from a fishery and touring park in Penley, Wrexham between 5am and 5.30am on Saturday 13 April.

Three caravans and a Land Rover were stolen from a warehouse in Byley between 3.30am and 4.30am on Friday 19 April.

Two more caravans were taken from a site in the Y Ffôr village near to Pwllheli in North Wales, at around 4am on Monday 22 April.

A caravan was stolen and a gate lock was damaged at Cherry Orchard Farm in Oakmere village at approximately the same time on Saturday 27 April.

There were two caravan thefts at a farm in Wettenhall village at around 3.30am on Friday 3 May.

Two more were stolen from Moss Lane Farm in Warmingham, at approximately 4am on Monday 6 May, as was a Ford Transit van. Criminal damage was also caused at the site.

Another Ford Transit van was stolen from the Ryton-on-Dunsmore village near Coventry overnight on Tuesday 7 May.

Two caravans were stolen from a caravan park that was damaged on Mill Lane in Coddington between 2am and 4.30am on Thursday 9 May.

Two caravans and a Ford Transit van were taken from Sevenacres in Capenhurst village between 2am and 3.30am on Tuesday 14 May, and a lorry was stolen from a timber yard in Long Whatton, Loughborough, Leicestershire, at around 2.30am on Saturday 18 May.

Detective Constable Paul Matchett, who led Cheshire Constabulary’s investigation into the crime spree, said: “Curtis Beston and Lennon and Liam McMahon believed that they could escape justice by carrying out crimes far away from their homes in the dead of night.

“They used stolen vehicles or vehicles with no registered keeper to steal caravans from storage sites as far afield as North Wales.

“There are around 40 victims and the money they have lost between them in terms of the caravans stolen and damaged alone is approximately £360,000.

“Thankfully we were able to catch the trio during one of their trips to Cheshire and prove the extent of their crimes via our extensive subsequent enquiries.

“I am delighted that the trio are now behind bars facing the consequences of their actions and I want to thank everyone involved in the investigation for all their hard work in securing these convictions.

“I also want to acknowledge the support that we were given by other forces during the complex investigation and I hope that this case highlights the fact that offenders will be brought to justice no matter how far they travel to commit crimes.

“I also hope that the sentences handed down by Chester Crown Court deters others from committing similar crimes.”