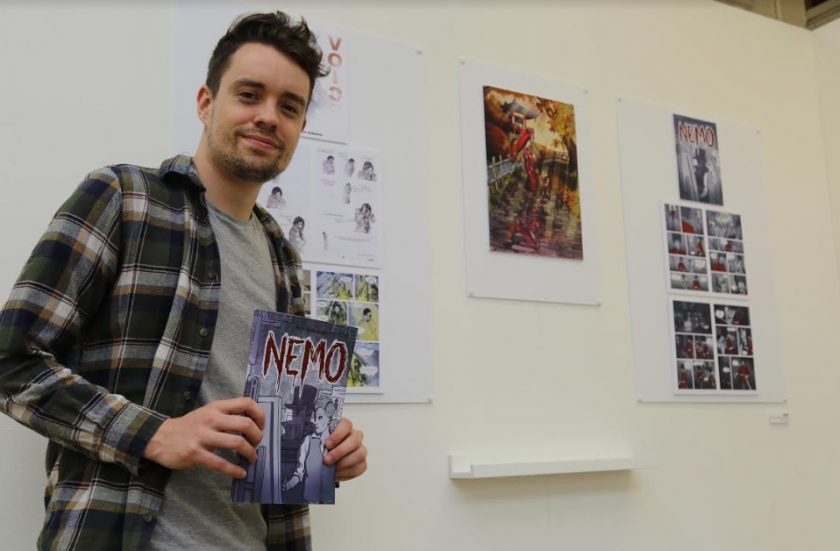 A comics author whose work became an online sensation has credited Wrexham Glyndŵr University with giving him the confidence to take “a leap of faith” into the profession.

Ben Edwards, 26, from Burnley, produced Nemo, a one-shot horror comic based around the Jack the Ripper case, with publisher Blue Fox Comics.

Ben said: “The book is a retelling of Jack the Ripper. It plays with a conspiracy theory that the artist Walter Sickert could have been Jack – it follows him and eventually, he gets to a point where he has to choose between being Jack the Ripper and being an artist.

“The whole thing began when I started working on a piece to enter into a competition that Blue Fox were running for a horror anthology. I originally applied in May of last year, but didn’t hear anything – well, not until they came back to me and said ’you’ve won.’

A student on Glyndŵr’s BA (Hons) Illustration, Graphic Novels and Children’s Publishing course, Ben spoke to lecturer Dan Berry – who is also a published comics author – about the project, which he used as part of his final year work.

He said: “At the beginning of the third year, I started work on the book in earnest, and I finished it just before Christmas. At that point, the publisher was looking to start publishing the book later this summer.

“Then they decided they were going to bring the publication date forward. We put the book up on Kickstarter, an online funding site, in the spring, and it hit its initial funding target of £1200 in just over a day. It went on to bring in £2,030 in stretch funding, which is where you add additional targets to your first goal.”

The book was published last month – and has proved a hit already, even though Ben missed his first chance to meet his fans,

He added: “The publisher is already stocking it and has taken it to comic-cons, and he tells me it is doing quite well – though the first one was during my end of the year show here at Glyndŵr so I couldn’t get down to it!”

Ben, who found out he had received a First in his degree on Friday, is now working on various other projects. These include a project called Voices, which Ben describes as ‘the story of a man struggling with mental health during a time it was misunderstood and how he deals with guilt and owning his mistakes.’

He has credited Glyndŵr with helping his development as a writer and illustrator – and for giving him the confidence he needed to succeed.

He said: “It has been fantastic coming to Glyndŵr. I wasn’t always an illustrator – I used to work full time. When I left school, I didn’t think I was good enough to do art. I worked in customer service jobs, cleaning jobs and things like that – I was happy enough, but I felt like something was missing.

“Then, I started doing my own children’s book for fun, and that picked up a little bit of interest so I looked into doing more. That’s when I came to Glyndŵr to do the course here – and they have helped me so much!

“It’s about taking that leap of faith – and coming to university gave me that confidence.

“I can happily say at parties now ‘I’m a comic artist’ and when people say ‘oh, so where can I see your work?’ I can tell them, and show them – and they can buy my comics!”

Dan Berry, Programme Leader on Glyndŵr’s BA (Hons) and M Des Illustration, Graphic Novels and Children’s Publishing course, said: “It’s great that Ben is realising his potential – and that people are finding out about his work.

“Over the past three years, it has been great watching Ben develop and grow in confidence – helping people like Ben to realise their potential is one of the privileges of working at Glyndŵr. I’m sure he has a great career ahead of him – and we’ll no doubt be meeting at comic-cons soon!”