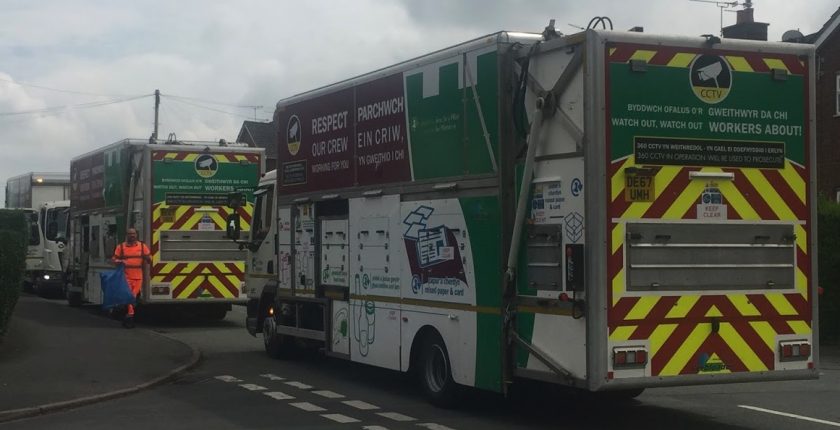 A senior officer has hit back after Flintshire Council was criticised for not collecting recycling bags between Christmas and New Year.

Residents voiced their anger at the move not to take plastic and cardboard items, describing it as “stupid” when many people had lots of packaging left over after the festive period.

The local authority said the decision was taken as the impact of the coronavirus on staff levels meant it couldn’t guarantee there would be enough workers to collect bins.

The fact only food waste would be picked up was advertised on calendars delivered in October, but the council’s website wrongly showed that other recycling would also be gathered, leading to a number of complaints.

Steve Jones, chief officer for streetscene and transportation, launched an impassioned defence of the under-fire service at a meeting held today, Wednesday, 13 January.

He said the challenges faced by his department during the pandemic had been unprecedented.

Addressing members of the authority’s environment and economy scrutiny committee, he said: “I’m confident that all the managers and all the people that make these decisions made these decisions for the right reasons at the time.

“I really hope that today there isn’t going to be criticism for those people who have made those decisions, myself included.

“I would like to say the language that has been used that the service has failed and about what went wrong is the wrong language to use.

“That undermines the service given the year that we’ve had and the effort that’s gone into delivering services over the last nine months or so.”

Mr Jones said bin collectors had been working hard since the New Year to make sure any outstanding recycling is picked up.

On a normal day, the council’s teams usually collect up to 40 vehicle loads full of recycling.

However, he revealed that last week it had gone up to 130 vehicle loads per day – more than three times the usual amount.

Explaining further why the authority was unable to carry out collections over Christmas, he said: “I’ve worked in the service for most of my life, and some of the challenges I’ve faced over the last year, have been completely new to me.

“In September I was faced with making a decision for what we should collect in December in the middle of what was the start of the second wave – a much worsening position.

“We’re a frontline service like every other service in the council we can’t afford for a single case to impact on everybody in the building and we’re all split into smaller working bubbles.”

Some of the criticism of the service led to rows breaking out on social media between council workers and residents.

Mr Jones said that although he understood the frustration of staff members, some had overstepped the mark with their comments.

He said: “I recommend my staff not to respond, but when they work hard and they get home and they see criticism, they inevitably do.

“I’d rather they wouldn’t, but I really don’t blame them for their comments.

“Some of my staff do go too far, there’s no doubt about it.

“There is a protocol for everybody in terms of social media and we need to make sure that they follow that.”