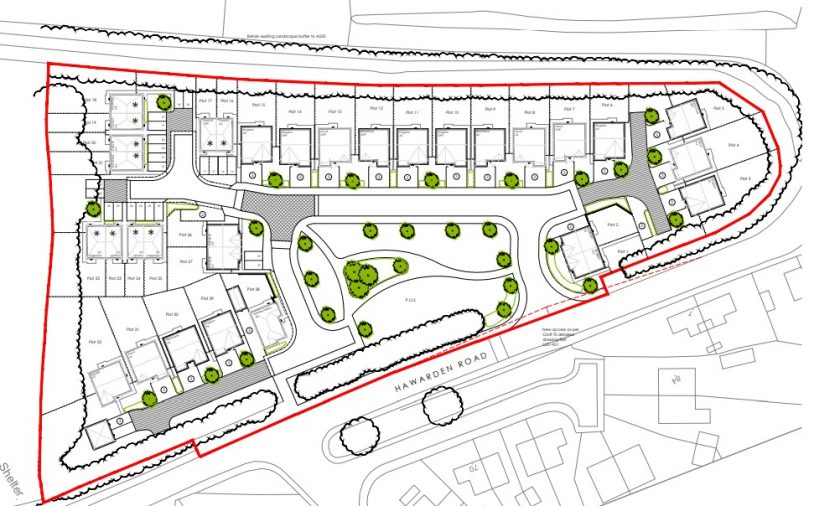 Renewed plans have been entered for more than 30 new homes in Penyffordd.

Permission for the proposals on land off Hawarden Road was originally granted by the Planning Inspectorate in February this year.

It followed an appeal against Flintshire Council’s decision to refuse the development in September 2017 amid concerns about overdevelopment.

That application was lodged by The Strategic Land Group and Green Gates Homes.

However, the site is now being taken on by Macbryde Homes who want to keep the number of houses at 32, but change the style of them.

In a planning statement, the St Asaph-based firm said: “This is a full application for the same number of units, with the same infrastructure and similar layout to the extant consent.

“The purpose of this application is to reflect the changes in house types and minor layout changes to reflect the fact that the site is now under an option to MacBryde Homes Ltd.

“The proposal has been found to amount to sustainable development by a Planning Inspector.

“There has been no material change in policy or physical circumstances since that decision was made.

“In these circumstances national policy is clear that planning permission should be renewed.”

A total of 10 of the 32 properties are allocated as affordable housing.

Access to the site would be via a new entrance off Hawarden Road.

The initial application prompted 165 letters of objection from residents concerned about the overdevelopment of the village, which would they said would remove its character.

However, in his report planning inspector Clive Nield said the proposed development would have negligible effect on the landscape.

He said: “I have concluded that the development would make a useful contribution towards the much-needed provision of housing in the area, and that it would be sustainable development, an important factor in the absence of a five-year supply of housing land.

“Although I consider the development would contribute towards a detrimental cumulative effect on social and community cohesion in conjunction with growth due to other housing developments in the settlement constructed or granted planning permission in the last few years, this is substantially outweighed by the need for and the benefits of the development.

“The development would conflict with several development plan policies.
“However, I consider these conflicts would be of a technical nature and would not be indicative of any significant harm.”

Flintshire planners are aiming to make a decision on the renewed application by the end of January.