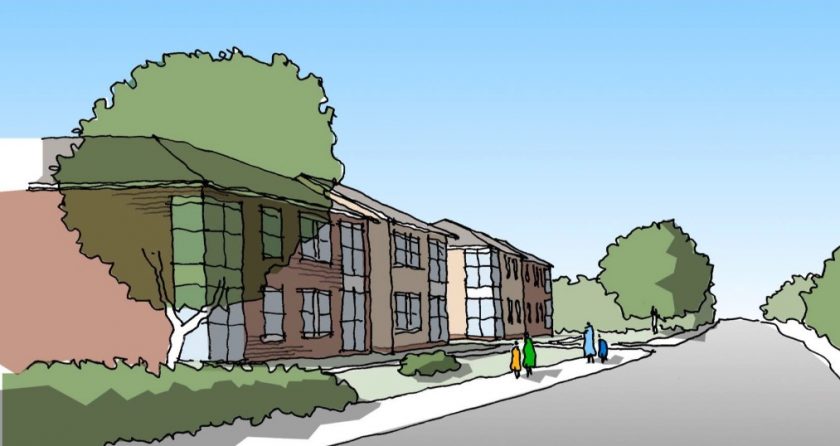 Proposals for 36 retirement apartments in Penyffordd rejected for second time

Propsals to build a retirement housing development in a Flintshire village have been thrown out for the second time in 12 months.

Councillors rejected an application to create 36 apartments for over-55s in Penyffordd at a meeting this afternoon amid concerns about over-development.

The scheme on Rhos Road was originally dismissed by members of the local authority’s planning committee last September following claims a disproportionate number of houses were being constructed in the village.

In July, a renewed bid to gain approval was put forward by Richard Heaton, who is behind the scheme.

In his submissions to Flintshire Council, Mr Heaton claimed it would make a positive contribution to the area by allowing elderly people to live independently.

However, community leaders unanimously backed the recommendation of officers to deny permission because of the impact of 261 houses which have been approved on appeal across several sites in the village.

At the start of the meeting, Penyffordd councillor Cindy Hinds said the local infrastructure would not be able to cope with any extra properties.

She said: “I just feel our settlement has been so heavily developed and to add more with the Local Development Plan coming into being brings the integrity of the whole planning process into question.

“The infrastructure is not there; our water and drainage is insufficient to cope, and our public transport is very poor.

“We do have a shortage of elderly accommodation, but we need bungalows.

“I hope the committee will agree with the officer.”

In a report, the authority’s chief planning officer Andrew Farrow said there had been three significant decisions by the Planning Inspectorate in Penyffordd.

The largest one saw permission given for 186 homes on land off Chester Road following a determination made by Welsh Government minister Lesley Griffiths.

Mr Farrow claimed there had been a ‘failure’ to acknowledge the cumulative impact of the developments, which he said was a significant factor in making his recommendation.

Officers were quizzed at the meeting on whether the reasons for refusal would stand up to scrutiny if Mr Heaton launched an appeal.

Other grounds put forward included that the application could prejudice the authority’s emerging Local Development Plan (LDP), which sets out where new houses can be built.

In response, Andrew Roberts, head of planning policy at Flintshire Council said: “I think it’s a defensible position in terms of prematurity with the LDP as we’re about to go to deposit consultation.

“The plan clearly has land allocated within it and it’s demonstrated through the housing balance sheet how we will meet the housing requirement of the plan.

At the end of the debate, the committee unanimously voted not to grant permission for the scheme.